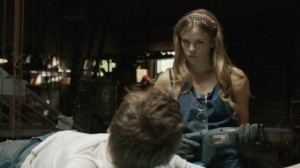 Austin Chick’s Girls Against Boys has good intentions, a fun premise and a gobsmackingly great title but unfortunately the final product just doesn’t live up to what is promised. The biggest problem with the film is that it takes itself too seriously, every aspect that should be taken with the tongue firmly inserted into the cheek is near enough gone and instead you are left with a film that isn’t quite anything; not a drama talking about women’s rights, not a horror film about a pair of crazed killers and not a thriller about a stalker who falls for her best friend. What is even more of an issue for the film is that the filmmaking itself shows real potential and both Chick’s directing and screenplay show that the film could have been these things but he doesn’t quite achieve any of them.

Shae (Danielle Panabaker), a young college girl with a job in a local bar and is having an affair with a married man. When she blows off her friends for a fun weekend away with the older man she has been ‘dating’, she never realises quite what she is getting herself into. Having got ready to meet Terry (Andrew Howard), he explains that he can’t do this anymore and must try and hold his marriage together for the sake of his young daughter whom Shae had no idea about. Distraught and pissed off, she goes to work at a local bar where men constantly both ignore and hit on her. When is caught crying by Lu (Nicole LaLiberte), the girls decide to shrug off men and responsibility for a long night drinking but when they end up back at an apartment with three guys, suddenly they both realise that nothing can ever be the same again. 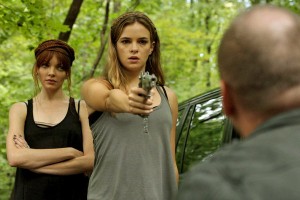 What a film like this doesn’t need is the seriousness and sadness of the real world, have some psychotic killer women sure but the need to bring rape and abuse into the film and make it seem so real, just feels gratuitous and trying to push the audience to feel some kind of emotion for the characters – unfortunately this doesn’t work. Lu persuades Shae to come on a killing spree of the men that have recently hurt her, and without knowing much about this mysterious and strong willed girl, Shae comes along for the ride. Then begins act two where they find themselves with a bunch o’weapons. It plays out as expected but there is something quite satisfying about watching these girls do the deed. It’s a little Thelma & Louise without the high spiritedness. But surely Chick should have been told that he should wrap up about now but instead act three plays out like some White Single Female, where Lu starts to follow Shae around and cook for her in her apartment as a surprise. She questions where and with whom Shae has been hanging around with and then finally, kills the one boy who seems to actually not want to hurt her. This all leads to two endings, one after the other, both are predictable but one is must more powerful then the other.

So it seems for this writer Girls Against Boys just didn’t have the je ne sais quoi that would be expected to make a film like this work. Neither funny nor serious enough, it falls flat trying to do too much and ends up doing very little. Both leads are entertaining enough and LaLiberte does a fine job as a slightly nutty serial killer (it’s all in the eyes) but they don’t set the screen alight as required and they don’t force the audience to come on to their side during the film, which surely is the point – you should be supporting and whooping the killers who are meant to be vindicating the wrongs done to them. Sadly this just doesn’t happen here.