Pirates! In An Adventure With Scientists Review 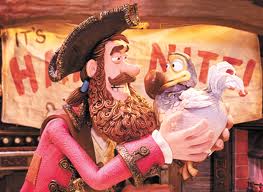 Although not as glamorous or prolific, Aardman Animations is starting to be talked about in the same breath as Disney and Studio Ghibli. Revered in the UK, they are attempting to storm the echelons of animation legend reserved for Walt and Hayao Miyazaki. The Adaptations of Gideon Defoe’s Pirates! adventures may be just the way to do that, a series that animation lovers and cinema goers can enjoy for years to come. The first instalment begins thrillingly, fast and funny, with a world rich enough for Aardman to exercise their creative muscles.

The luxuriously bearded but inherently incompetent Pirate Captain (Hugh Grant) is desperate to win the Pirate of the Year award. His crew of odds and ends of the pirating world adore him and want him to scoop the prize almost as much as he does. A chance encounter with Charles Darwin (David Tennant) after boarding The Beagle reveals that the ships plump parrot Polly is in fact the sole remaining dodo bird. Convinced by the nefariously driven Darwin that presenting the bird at The Royal Society will earn his riches beyond his wildest dreams, the Pirate Captain embarks for London on an adventure with scientists that will bring him enough booty to win his cherished prize.

Though the Pirate Captain and Darwin are fairly well developed there are a plethora of characters that are less refined and underused. This being said it is unfair to compare them to the fully refined Wallace and Gromit as there are far more pirates that have not had the same amount of screen time as the infamous duo. It seems likely that if there is indeed a franchise in the works Aardman have strategically left the characters to be utilised in later episodes. The Captain’s No. 2, voiced by Martin Freeman, is left relatively untouched but to bring in such talent for a character with very little to do betrays an ulterior motive.

The story is fantastic without delving too deep, though this is the weakness of this film. Peter Lord instead directs with a frenetic pace that never subsides, even the slower moments do not allow attention to wane. There is no back story behind most of the characters which can leave them feeling distant, choosing instead to focus on the fanciful and the funny to keep the film ticking along. Though this is a flaw of the film, it does not fail to entertain and the characters are all completely delightful without ever commanding too much attention.

Hugh Grant is the perfect voice for the Pirate Captain. His pitch bridges the gap between the hilarious lunacy on confronting a ninja 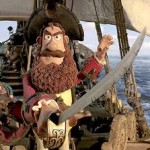 The Pirate Captain’s facade is affable and memorable giving the franchise a charming appearance. The first Aardman film to use CGI, the studio has embraced the techniques adding new depth to their already supremely rich visuals. From grand images of Pirate of the Year nominee Black Bellamy (Jeremy Piven) riding a whale into the side of a tavern before sliding in on a wave of gold doubloons to the small, insignificant but feverishly detailed bookshelves in the Pirate Captain’s cabin. Every inch of this newly constructed world is devised meticulously and will delight those familiar with Aardman’s very British sense of humour.

Lord and his team have begun what appears to be a series of impressive films. Though it does not quite stand up to Wallace and Gromit, it has time to be refined and that fact that it already compares well to Chicken Run shows how close they may be to creating another animation classic. Not quite on top form, but a near miss still produces an uproariously funny adventure for the pirates, may many more follow in its wake.