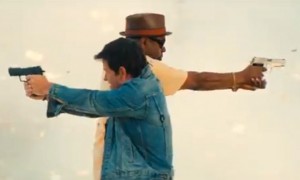 Mark Wahlberg, beefed up (presumably from his work on Pain and Gain) and exuding a brash, stupid kind of charm (presumably from his work on Pain and Gain), orders something from a waitress in a diner selling excellent donuts, then winks at her. She smiles bashfully, then goes off to get his order. She is seen maybe twice more in the film, each time flirting with Marky Mark, who continues to be a bit leery. It’s difficult to know what is most distressing about this character; it could be that instead of slapping the boorish customer, she – like every other female in the film, bar one – responds like she is utterly powerless to the advances of this muscly lunkhead. This is the first scene, and so the audience soon realises that this is going to be yet another film where men can be as obnoxious as they like and women will still fall over themselves to be with them. Yet perhaps the most upsetting thing about this waitress is that although she soon disappears, she is the second biggest female character in the film.

Yes, 2 Guns is yet another brainless, macho piece of action cinema where cars are trashed, women are easy or duplicitous and seemingly endless supplies of bullets are fired mindlessly with no tension, stakes or consequence; the title is presumably a deliberately ironic understatement. The terribly written to simply non-existent women of the film signify that 2 Guns is a film from a bygone era, where men did manly things like killing and shooting and driving really fast – the result is the feeling that we’ve seen it all before. The weight of a hundred boring shoot outs and thoughtless, dreary plotting is lightened only by an easy, enjoyable chemistry between Wahlberg and his co-star Denzel Washington. Together they add much needed charm to a film that is otherwise chronically lacking in it. Even their combined powers, however, can’t stop the final action sequence – which is deliberately over the top – from being a noisy, wit-free cure for insomnia.