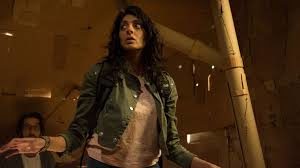 Well its not often you condense the plot of a film, into the title but here we have it. Dave (Nick Thune) makes a maze from cardboard. He literally builds it within the confines of his front room. When Annie (Meera Rohit Kumbhani), his long suffering girlfriend returns home, she discovers Dave is stuck. He ventured into the maze and now cant find his way out. Annie calls Gordon (Adam Busch) to help. Together they decide to mount a rescue mission.

Dave Made A Maze reflects the power of a great idea. That idea has also the bonus of being very simple. A man in the midst of depression builds an away place. A hostile, labyrinth place that reflects his emotional state. Director Bill Watterson is the real star here. He handles the film with the chaotic wit it needs. 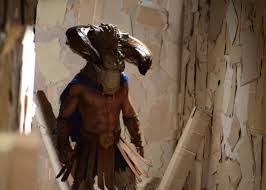 He also pulls it back from the CUBE (a 90s sci fi film masterpiece), that was pure horror and this is more an examination of male depression albeit with sardonic wit at the fore. It often over reaches the expectation and this imbibes a sprinkle of the absurd, which it benefits from. Its not all great though because of this. The films 80 minute run time doesn’t hold the idea completely. It loses steam in the third act and the piece seems to collapse under all of this. Though not a major negative, it shows how creativity needs coherence and control. 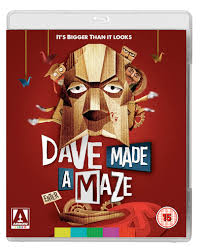 Feature-length audio commentary – Watterson is the best of the two talking here. He seems to understand what could be achieved by the film, its limitations and how it came together. This helps understand why it doesnt work but also why its compelling enough to see through.

The Worst Fundraising Pitch Video Ever – Hilarious to watch.