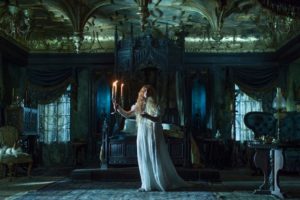 A gothic horror story from Guillermo Del Toro. Examining the trade in culture, money and ideas between the new and old world and the awful legacy it hides. Edith Cushing (Mia Wasikowska) lives with her father in Buffalo. He is a major business figure in the region and an investor in new ideas. When an English land owner and inventor, Thomas Sharpe (Tom Hiddleston) and his sister (Jessica Chastain) visits to gain funding, it is met with indifference. However Edith is smitten. He says he is in love with her as well. But when Edith’s father is killed, something seems to be not right with Sharpe. 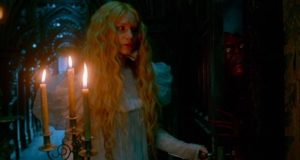 Del Toro won a best director oscar last year for The Shape Of Water. In that film, visual textures merged to create a stunning style. However narrative was secondary to the piece. In Crimson Peak, it meets the perfect mix of visual and narrative. This is a wholly better film than Shape of Water. 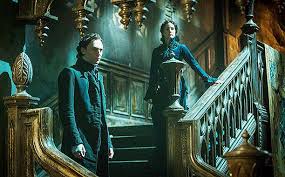 To the Del Toro regular, it contains his best work but also mixes the Gothic with the historical (both things Del Toro loves). To the unschooled, it is a Gothic tale of sex, revenge and greed. It has the conventions of the genre. The haunted house, the Edwardian setting, for film its the lush costumes and even the harsh wilds (visually stunningly executed all of them are). 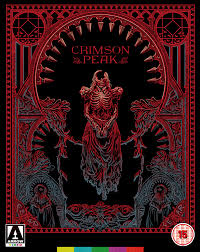