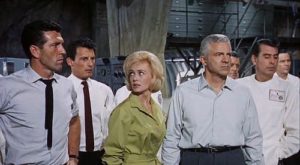 I personally, could watch Dana Andrews standing next to a wall and telling me about paint drying on said construction. I imagine his gravel voice, detailing with a purr and tipping foot throat thing, the paint becoming oxygenated and drying to a colour fastened hue. Or some shit like that. I know Andrews career well. Like many, I remember him from the gritty Noir films he peopled in the 40s like LAURA and FALLEN ANGEL. I also have a glowing admiration for his role in BEST YEARS OF OUR LIVES. Then as he grew older and the roles dried up, he starred in B movies. Some had high level directors and stars like THE NIGHT OF THE DEMON and Jacque Tournier. Then we have CRACK IN THE WORLD. A slice of earth in crisis, science gone made, post 50s Science as device of ultimate evil. 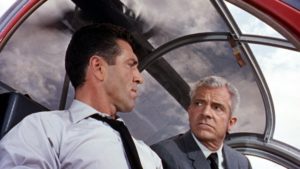 Dr. Steven Sorenson (Andrews) and his wife and fellow scientist Dr. Maggie Sorenson (Janette Scott) have a chance to utilize geothermal energy from the Earth’s magma core. The global project to discover a great eternal energy source has two distinct sides and Sorenson has the edge. The only way to do this would in effect be to detonate a thermonuclear device deep within the Earth s core. So they have drilled down and now they have convinced the international scientist community to let them have a bomb. Despite warnings from Maggie’s ex-flame and fellow scientist Dr. Ted Rampian (Kieron Moore), Dr. Sorenson proceeds. The experiment causes a crack within the earth’s crust and threatens to split the earth in two if it is not stopped in time. However Sorenson has discovered he will die of an incurable disease and maybe it will be better that the Earth goes along with him. 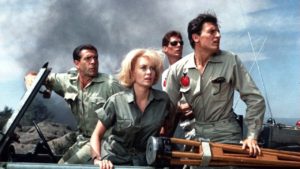 Andrew Marton. Not heard of him? Well you should have done. He is the man behind some of cinema’s greatest action sequences. The chariot race of Ben Hur, that was him. Alongside William Wyler. The battle scenes of A Farewell to Arms, he worked as second unit director on that. Marton uses these experiences to execute a great slice of science as fear and cure, B picture. Maybe its the solid cast. Maybe its the crew. Or maybe its the anti nuclear testing message but CRACK IN THE WORLD never lets up and neither will you. Now I guess that you will enter it, as the audio commentary team of the amazing Allen Bryce and Richard Hollis say, with the expectation of a kid. However you will go along with the whole. Warts and all. Delighted. You will be. 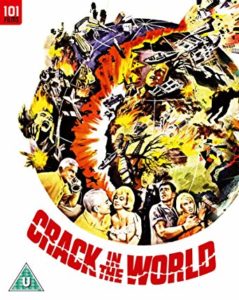