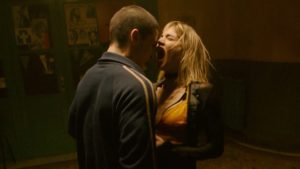 Gasper Noe is back with another endurance feat. A troupe of dancing teens have just completed the final rehearsal. The group have a great time ahead but for now a cold, snowy exterior is rejected for a warm delightful interior. You see they are going to celebrate their up coming tour of the USA. A tour that will bring them to the front of American money and the future of dance. The DJ turns on the decks and spins disco, acid house, techno and more. The beats see hands move, feet groove and body smooth. However as the night builds and the sangeria flows, something is not right. The liquid is spiked. The dancers feel unwell. They feel strange and then things begin to fragment. Sexual desire causes many to thrust and grind, anger spills over with fists and thumps, violence sees blood flow and fear sees panic unfold with screams and shouts of danger. This nightmare builds and builds until the end of life… 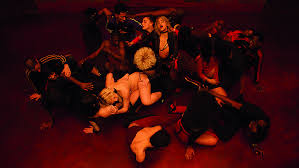 Gasper Noe has moved along from his time as part of the pack of extreme cinema, to where he is now. This would be the obsessesion over sexuality, physicality, violence and the self. He loves to expose the viewer to the dark tangents as they surface. Blurring light, music and a camera which navigates remorselessly through space and time. There is more here. Noe seems to want to explore the present in the state of primal beings. He engages the extermes that are in the base impulses of humans. Based here as teenagers, aspiring to being a dance troupe on the verge of success.  Again he mixes music in to effect but seems to want to explore how all these things inside the dance scene grew into abstracts.

Being from the music field I related to Noe ideas on mob mentality, musical energy and its intoxicating rhymical power. Music defines a self and identity in its performance. He then blurs this with primal urges and the gravity of violence. I am not always sold on Noe, his work and its ability to be essential. So here it seems to meander along, often without motive other than Noe camera needs to move around spaces to avoid boredom. This muddies its translation into tangents that as a whole work but might be very difficult to return to without sensing its weakness in narrative and mise en scene. 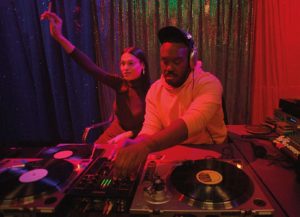 The best thing on it is Disco Infernal: The Sounds of Climax. Alan Jones is an expert in understanding the music scene and where songs are from, backgrounds of the artists and more interestingly, how they relate to the piece via France, Noe and thoughts on screen. Shaman of the Screen is also very good indeed. Alexandra Heller-Nicholas exposes the best of Noe, how he has chnaged and evolved with his substance and style. I still agree that this is not his best film. That other films are better at defining thoughts, style, skill in craft but its a worthy review. 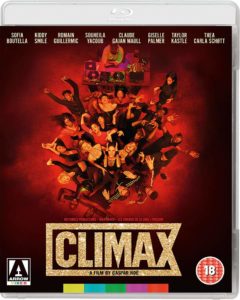