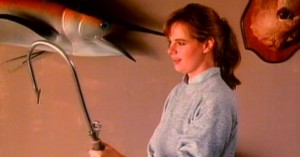 He likes to clean them on his birthday and not tell anyone. Not even his mother who is in the other room. Also dad likes to keep his guns loaded just in case the commie agents come for him. You now can guess that Ed Jr is a little clumsy and sends a round through the wall and into mummys chest. Dad comes home and then goes bananas. 15 years later and Ed Jr and dad arent talking much but his dad tells sonny to come to the beach house for a vacation…and bring some friends along… 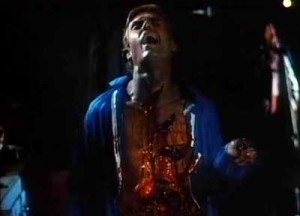 Wow…The thing with horror films of this nature were and are that they had to have a series of cause and effect spirals leading to an ultimate end. The cause and effect were often one person / group do something to another person and that other person or related others set about revenging in the future. So Ed Jr shots mum and then 15 years later dad hacks up the friends. The problem is that if you have seen good slashers and even mediocre slashers, you know the regime. You also know that the real reason for watching is the dispatch sequences. These are superbly executed, well produced and edited for pace. This film is also of interest to the fan of censorship and seeing what we often could not. The original version (this is uncut) missed this little gem…deleted shots of a fish hook being forced between the legs of a girl and emerging from her stomach.That is about the sum of the shocks…Sadly the acting, direction and tension or build up scenes lack finesse and make it a little weak in the complete deal. 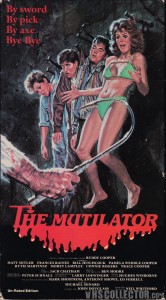 The 2k restoration looks great and sounds tight as well on the Blu with the DVD still looking good. The commentary is ok but adds nothing of note except for Buddy having a great time with his star. The doc is good however and might inspire film makers else where. Michael Minard score discussion is very worth while and so is the screenplay components, as they can open doors to film as a form and slasher as a genre…