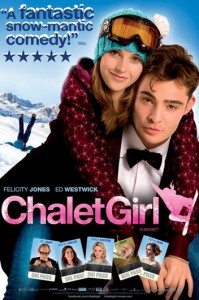 Jones plays former skateboarding champ Kim Matthews, who abandons the sport she loves following the tragic death of her mother. Left to care for her unemployed father (Bill Bailey) Jones finds herself willing for more than just a dead end job at the local chicken shop.

When an opportunity arises for Kim to work as a chalet girl in a swanky ski-resort in the Alps, she soon finds herself immersed into a bizarre world of champagne-popping luxury.

As she swaps a life of skateboarding for sledging slopes, she finds that her snowboarding talents aren’t the only thing worth discovering. As her charming but spoken-for-boss Jonny (played by Gossip Girl’s Ed Westwick) begins to take more than an interest, things get a little too complicated for our Chalet Girl.

Considering that British rom-coms have a notoriously bad reputation for inducing the audience with nothing other than a flurry of cheap gags, Momentum Pictures’ Chalet Girl packs a surprisingly rare set of qualities. It doesn’t promise to be anything other than a light comedic distraction, but it somehow manages to collate themes of class, tragedy and determination through a touching romantic backdrop.

While the clichés are undoubtedly still present, Felicity Jones offers more than a typical rom-com leading-lady effort by showcasing some impressive comedic timing. She approaches the role with an adorable Juno-like attitude that instantly has the audience invested in her snowy journey of self-discovery.

Chalet Girl is out on DVD from October 3r.d.