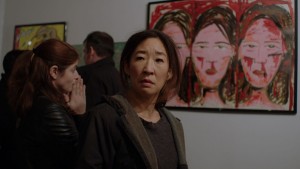 Watch Catfight, do whatever you need to do but make sure that you watch Catfight and enjoy it for all its intricacies and madness. Onur Tukel’s Catfight is a film that comes from no where – you aren’t expecting it and don’t realise until after how much you needed it. Like the Greek concept of catharsis, Catfight will make you wear your emotion on your sleeve. It will physically shatter and emotionally bend but by the end, you will realise it was totally worth it. Satirical, heavy handed, bloody, hilarious and dirty – Catfight is an early competitor for one of the best films of the year (and leaves me wondering why it hasn’t gotten more noise around it). This is the purest and most fantastic reason for indie cinema – this is when the system works at its best.

Tukel’s film has an incredibly impassioned cast led by the outstanding double team; Anne Heche and Sandra Oh with a great supporting turn from Alicia Silverstone, Myra Lucretia Taylor and Amy Hill. This is a film completely sure about putting women front and centre and allowing them the space to create fantastic performances.

Veronica (Oh) is a superficial, wealthy housewife who has become used to the more expensive things in life since her husband ultimately makes a profit from the ongoing war and Ashley (Heche) is a narcissistic artist who believes that it is her role to highlight the ironies of war (and in turn, believes that her art above all others is wise and all knowing) whilst living with her girlfriend Lisa (Silverstone) who really just wants to have a baby. Veronica and Ashley haven’t seen each other since college but their paths cross when they both attend the same glamorous event (held by Veronica’s husband where Ashley is helping tend bar) and a long time rivalry comes to a head in the most bloody and brutal of ways.

When Veronica wakes up from a coma after two years, she finds that her life is completely different and learns how to start from the bottom whereas Ashley really is on her way up.

Catfight is talking about many different themes in contemporary America and this pair are a microcosm for the continual wars and struggles that people all over the world suffer through and have to navigate day-to-day. From being a woman in a patriarchal society, to understanding the role that society expects from you, how to find your place in the world and where you belong within the class structure, the difficulty of maintaining relationships and how easy you can lose everything. Tukel is continually reflecting the audience in the characters and pushing them to the most extremes possible. Moments of the film wouldn’t be out of place in Black Mirror or something by Armando Iannucci (The Thick of It, Veep).

Most interestingly is the way that the film confronts women and violence, which is a current discourse in many circles. From 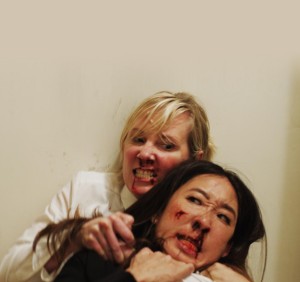 Isabelle Huppert in Elle to Viola Davis in How To Get Away With Murder, women are confronting and being confronted in ways that are enabling all kinds of conversations. Catfight is no different – expect, if the central pair’s physical fights were between two men, no one would bat an eyelid, in fact audiences are used to it but because this is between two well kept and by conventional standards, good looking women, it’s forcing questions and making you feel awkward… but why?

Catfight is a blessing of a film and one that gives over and over and over again. One that would be fun with a different group of people every time, just to see what discussions come from it.