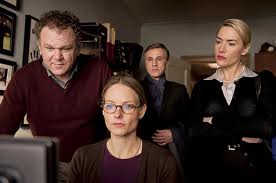 Carnage is a strange beast in the world of Roman Polanski. It is vibrantly funny and superbly engaging right from the offset, immediately ensconcing the viewer and bringing us into the world of the characters. It is a short, sharp feature that is consistently funny and Yasmina Reza’s play is focused on fierce character evaluation by making a mockery of people that she loathes. The problem with it is that it is that it’s a short, sharp feature that is really nothing more than consistently funny and focused on sardonic destruction of the main characters. This is fine for a first watch; in fact the first watch is hilarious. But as this is a DVD review it would be remiss not to mention that the second watch is far from funny and there is not much else going on in this film.

Meeting to resolve a dispute between their sons, two couples clash in heated exchanges as their attempt to draw a line under the conflict turns into a collision of personalities. Fierce argument becomes farce as the discussion descends into madness. Ridiculous does not begin to describe the action which may forces a good few laughs but is short on anything more than a derisive ridiculing tone.

There really is very little to say about Carnage. As mentioned the script is tight and sharp but as much as Reza delights in the scorn poured unrelentingly on the characters there is very little depth. All the characters embody traits that are regularly whinged about. Greed, slovenliness, pretention, brashness or just good old fashioned bad manners are all put on display and the four strong cast do a superb job in conveying each attribute and finding the humour in it. Christoph Waltz, Kate Winslet, Jodie Foster and John C. Reilly is a cast list to die for and each provides their own unique on some intriguing but essentially facile people. 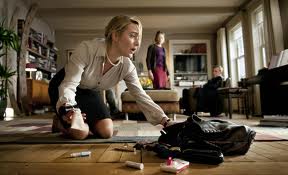 Polanski does an admirable job of containing the action in one New York apartment with most of it actually occurring in the living room. He uses his incomparable experience to create wonderfully framed moments of tension and frustration often containing all the characters at different depths before moving around the room to watch them singularly. The problem of course being that there is not a lot he can do to heighten the action. He seems to lack the ingenuity or the desire to make the film a more intriguing watch by reserving his own skills and treating it very much like a play. In 12 Angry Men, Sidney Lumet records the action inside one jury room but masterfully utilises depth of field and shallow focus to build a rising tension between the characters. There is little of that here, only Polanski’s small attempts to be directorially adventurous.

Carnage is but a trifle amidst the Polanski canon. A man who created what must be considered one of the best films of all time in Chinatown seems to lack the invigoration needed to turn Reza’s play into more than just a short laugh riot. Although that in itself is an extremely pleasurable thing to take in, it does not really deserve a slot on the DVD shelf.