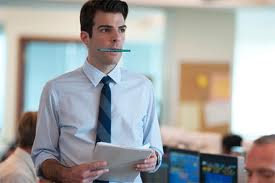 Nervous anticipation buzzes throughout an office building. Veterans of the company have seen it before, the financial industry has its ups and downs and their reservations are masked by ice cool demeanour. The rookies pace anxiously, asking questions, being told to hush. Little do they all know a monumental change is coming for all those concerned in the industry, well apart from those at the summit, making the world changing decisions. Margin Call doesn’t pull punches as it examines the smaller crises that lead to the 2008 financial meltdown. It helpfully doesn’t paint a picture of every banker, analyst or broker as some kind of devilish being but merely as people who worry about their jobs and are offered lucrative salaries and bonuses to make decisions they often know that will cripple others. The film starts with a genuine feeling of trepidation but loses much of its immediacy as midnight meetings on how to find a solution dissolve into long discussions about morals and wealth. Although this fictionalised account of the beginnings of the crash is gripping and sublimely acted, one wonders if a viewing of Ross Ashcroft’s magnificent documentary Four Horsemen based around the same subject would be far more beneficial.

Through investment fraud and poorly concocted risk models, an investment firm is facing unprecedented losses. This anomaly is only 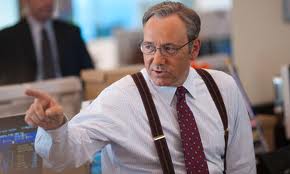 discovered during a mass firing of employees. As Eric Dale (Stanley Tucci) is being escorted from the building, he hands a USB drive to his subordinate Peter Sullivan (Zachary Quinto) and tells him to “be careful”. Sullivan, along with fellow rookie Seth Bregman (Penn Badgley) and trading desk head Will Emerson (Paul Bettany), completes the unfinished project to find the shocking news. The problem rises up the ranks to risk management head Sam Rogers (Kevin Spacey), then to division head  Jared Cohen (Simon Baker) and finally to CEO John Tuld (Jeremy Irons). The film delicately balances the gravity of the meetings deciding the future of the company and its trading partners with Sullivan, Bregman and Emerson shooting the shit, talking about work and life in general. Eventually the gravity of the situation kicks in with solutions to the problem not being something everyone is particularly comfortable with. 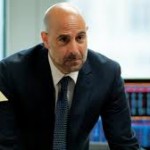 JC Chandor has written an intelligent script that analyses the reasons intelligent people would be party to such deceptive behaviour. Money, circumstance and of course money rules all and each character is unique and subtly developed. Quinto is in Spock-like form as a former rocket scientist who joined the firm for the fiscal benefit. Badgley plays a young man who has the spark in his eye and is lured by the extravagant lifestyle whereas Bettany and Spacey are elder statesmen who have played this game for a long time and have seen the ups and downs before becoming impervious to the cold heartless realities of their business.

Margin Call explores the mindset of the industry which changed the world irrevocably and ruined many people’s lives. Irons playing the crude and roguish CEO with coal at his centre, devilishly smiling into the 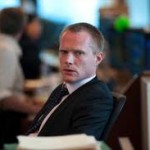 camera as he tells his subordinates how he didn’t get where he is today with brains. But for all its criticism on the business, Margin Call is more of a character study along the lines of 12 Angry Men than an explorative documentary style. It is hard to get away from the fact that the film leaves some sympathy with workers of the banking sector and some may find that hard to swallow. It may however spark an urge to investigate the scale, causes and implications of the financial collapse and purely on that merit it should be lauded, but not breathlessly.