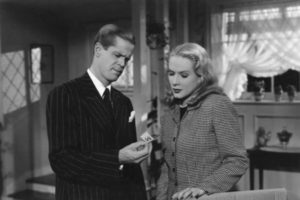 We can start anywhere and still not say enough about the brilliant BLACK ANGEL. Its rare for me to jump straight up and confess love for a film but there you are. 37 films left and I have to get to the point fast. A film that many have tried to replicate and few have been able to master. For me to best focus, I will examine director Roy William Neill, stock in trade studio man and director of mysterys but who is most famous now for knocking out the Basil Rathbone Sherlock Holmes films. Now I love the Rathbone Holmes but a lot of people do not. However I direct you to BLACK ANGEL to justify my point that Neill made films of wit, energy and above all economy. Part film noir, part post war hang over, part homage to the technique of the new, BLACK ANGEL spends a frenetic 80 minutes, packing in a cohesive story, evil villians, a murder, a mystery and a death row inmate. Without hampering anything.

A dead singer Mavis Marlowe (Constance Dowling) lays on her bed in her apartment. A record plays a fatal tune. A falsely convicted man is seen, tried and sent to wait on death row. His wife, Catherine (June Vincent) wont give up however. Alcoholic composer and pianist, Martin (Dan Duryea), is also on the case. His obsession was the singer and now its the mystery. They team up in an attempt to clear her husband of the murder. Their investigation leads them to face-to-face with a hard as nails policeman, Captain Flood (Broderick Crawford). He says back off. I got the right man. They say wrong. Now another is in the frame. Nightclub owner, Mr. Marko (Peter Lorre), could have been the man to deal the fatal blow. He denys all. He also wants to silence anyone who might suggest otherwise. 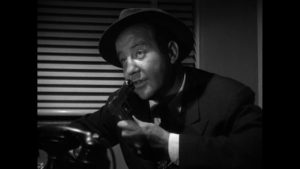 BLACK ANGEL is about film making and no mistake. Arrow restoration stands tall as a stunning work of love and skill. The film was in good shape but now it is in lovely crisp shape. Light and shade. Texture and tone. That lovely white light on eyes from slated windows…well yes please. Then listen to film scholar Alan K. Rode commentary and hear for yourself the brilliance of Neill. The film was a direct homage to the genre and the film makers of the era. Neill studied up and understood what he was offering. Rode then keeps us in a constant loop of idea and execution. Neil Sinyard also appears on the set and though less rewarding, makes a case for the cast and film as a worthy piece of B movie history (it is). Then to play us out Philip Kemp turns up for an essay. Lucky you indeed. 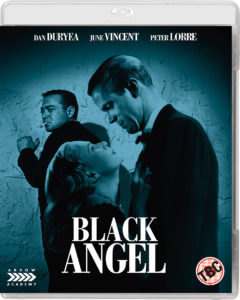 • Optional English subtitles for the deaf and hard of hearing

• A Fitting End, a new video appreciation of the film by the film historian Neil Sinyard