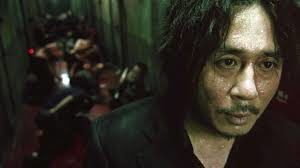 Park Chan-wook acclaim was not solely earned by 2003’s OLDBOY. However it was the film that caught the international community attention. It is much more than the piece often touted around. For instance it is bold and stand up to the other films in this electrifying trilogy (known as The Vengeance Trilogy and offered here as all three to own). It has earned critical heavyweights praise and adulation but then critics are not short of jumping on a bandwagon. OLDBOY is much more. Much, much more. 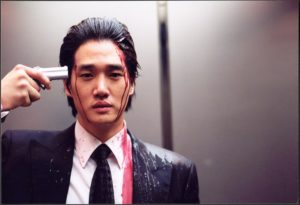 1988, a businessman named Oh Dae-su (Choi Min-sik) is arrested for drunkenness. He missed his daughters birthday and seems to have over indulged to forget. His friend bails him out from the police station, then he disappears. Waking up in a sealed hotel room, with gas to subdue him and food delivered through a trap-door, he is a prisoner. Dae-su learns that his wife has been murdered and he is the prime suspect. Then one day he is let free. To the new Korea of money and optimism. But he is still the old self. Asking questions as to why he was kidnapped? Who did it to him? Why was his wife killed? Where is his daughter? 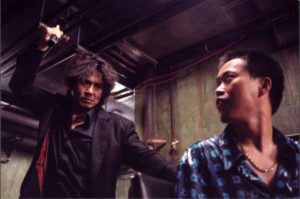 I have seen OLDBOY three times in my long film watching life. The first time in a cinema screening, the second on DVD and the third, now in this Blu Ray presentation. Forgetting for a second the actual review of the film, which would go by way of Oedipus, OBSESSION (the De Palma film) and the translation conversation (Manga and cinema), I will instead focus on the film. 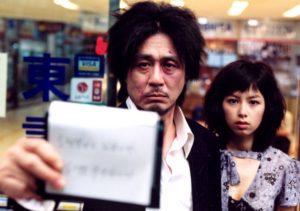 4K may have defused the digital images, it might also have really snapped the dark, earthy colour palette. Which reminded me of the cinema screening. That was grime soaked and halogen tickled. I think Arrow have got this right and for once it really make a strong case for newer films look better under the process than some of their older partners.

The 1080p are for shit. I was not impressed. Though a step up from the DVD, it is saying something when you have to keep playing with settings just to get clarity on washed out images. 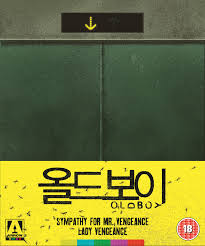 My usual top 3 . Firstly I have to say Old Days (A film and an extra in one) is a bit flabby but grades Chan-wook work as well as in particular this film. Made 13 years after its release, it also enables us to see into the creators future, via his master work. Commentary with director Park Chan-wook. He was a critic and it shows. He punches the shots, notes the action and really defines his ideas on the screen. Why is this worth your time? Well you know the artist via their art and now via their own interpretation of it. Third is Autobiography of Oldboy, a three and- a-half-hour video diary of the making of Oldboy. What works here, is that the film captures perceptions from the gaze of making a film. Valuable for film students everywhere.