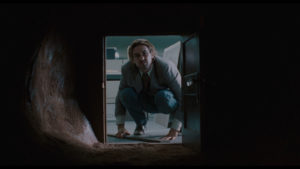 John Malkovich was mid way through the journey of life when he came to a wooded area. He looked from side to side and then was held back by three agents. These three agents, were averae people but they had caused his mental state to become analysed in depth. Unpacking his very core essence. This saw his deepest components exposed to anyone in teh general public. Of course this is both a steal from Dante DIVINE COMEDY and the film itself. When it first came out, BEING JOHN MALKOVITCH was seen as either a surrealist masterwork or a pretentious slab of indie America. I remember watching it and being both impressed by its unique quality and its abstract satire. Director Spike Jonze, first film became an exceptional case of the music video magician, taking the notes he made extensively, then crafting a film with more layers than 30 minutes inside the mind of Malkovitch. 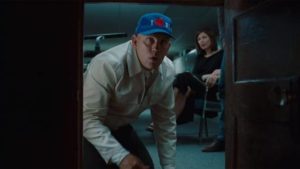 Unemployed puppeteer Craig Schwartz (John Cusack) has found his operatic plays, all executed on a street corner in New York, are not making the cut. He reluctantly takes a temp job as a filing clerk in an office downtown. He is based on the 7 and a half floor, working under the eccentric Dr. Lester (Orson Bean). While at work, Craig sorts through a series of cabinets. Dicovering one has a small door behind it. This doorway, once opened, reveals a portal into the mind of renowned actor John Malkovich. You get 30 seconds inside the mind of this man, walking in his feet and talking with his voice. Then you are dumped out on the turn pike. Craig shares this with his co-worker Maxine (Catherine Keener), a woman he desires. They agree to secretly share this. However Craig’s restless wife, Lotte (Cameron Diaz) also becomes obsessed with the portal and the other woman. 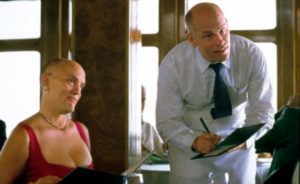 When the future comes and we look back on our film past, some films will not survive the transistion. The reason is simple. Its all to do with critical haze and cultural malaise. Films like IN BRUGES, SYRIANA or THE HOURS for instance will be dumped to the side. Discarded for being little more than empty postering. BEING JOHN MALKOVICH might however stand up to the future critical eye. The reason is simple. MALKOVICH is a reflective mirror. For you can cast whatever opinion you have of the piece and substationally find support for it. It satirically delves into fame,the media, stardom, sexuality, identity, truth, self. You name it, it is there. The extras within the film really extrapolate all of this.  From the John Horatio Malkovich: Dance of Despair and Disillusionment, the full pseudo-documentary seen in the film, which tries hard to glean the man from dream and illusion. 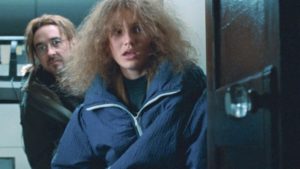 To the John Malkovich and John Hodgman, a conversation which delves into the enigma of an actor we never really know. The best piece the commentary on select scence by Gondry. He has the handle of Jones and the pulse of the absurd. The disc needed a voice like this and it is good that it got it. To the transfer however I have to say this. It has a cinematic, celluloid grain issue that I like but I suspect those of the ‘perfection crowd’ will cry about. Dont, its not worth it.