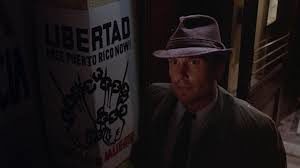 When you connect any film with another film, espically one that has been very succesful, it leaves you wide open for attack. BADGE 373 is connected often, (within the special features at least) with THE FRENCH CONNECTION and THE SEVEN UPS. All three are crime films based on the exploits of certain cops and certain infamous moments that made their respective careers. One film is an award winner and the other has the greatest car chase of all time. So it is high praise indeed for BADGE 373 to arrive at this doorstep. Now we have more also to connect them. Locations. New York and the surrounds. They share some of the same people, navigating all three over the course of the early 70s. They have a few crew members, working on either and a few cast members, that are there for the legend and the legacy. However does BADGE 373 stand up to the others admirably?

Eddie Ryan (Robert Duvall), is a tough, Irish NYPD cop. He pulls off sting after sting, smacks up a few of the criminal elements. Sadly he has been given a hard time after his service is called into question, due to an accidental death. He now works in a bar, sleeps with the door woman and seems happy enough. However the rejection hits him hard and he starts heading out on a one-man crusade. Someone killed his partner, Gigi Caputo (Louis Cosentino). Someone who has a connection to the Puerto Rican drug kingpin Sweet Willie (Henry Darrow). Drugs, violence and now a shipment of guns for Puerto Rican independentistas are floating around. Will he stop them or will he fall on the sword of his conviction? 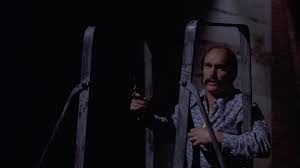 BADGE 373 is on the lower end of the three films mentioned above. By lower end, I mean in every sense. Film technique, direction, production, talent and even script. This is my problem with comparions. Viewers come to the package and yes, I understand they need to link it but they are being short changed by the film. It might have a pivotal central performance from Robert Duvall. It  might have a story that is both real (in sense of fact) and immediate (in sense of tone). However this is where it ends. The direction is unbalanced, the script pulls heavy in much of the long dialogue scenes. Thankfully you have a series of very good extras to bolster a film that is mediocre. These lift a film that may have enraged certain viewer and I would not have blamed them. 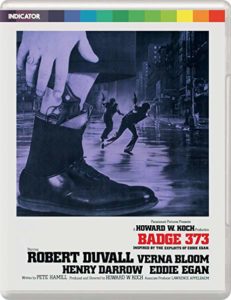 HD remaster quality comparions is difficult. I have no version to review against. Its nice enough though, in my opinion. Projected it had that grainy feel and light stutter I love from the seventies cinema.

Right, this is where it gets grand. Welcome to Fear City runs at a good pace and covers all three films above. NYPD detective Randy Jurgensen is famed for his CRUISING stint (that is, the film is based on his exploits) but he worked on so much aside from that, film wise. He makes for engaging listening. The stills of him on the films are nice. Then you have a tone of him never taking it too seriously. Lethal Enforcers sees film critic Glenn Kenny, cover the anti hero cops of cinema and focus on the 70s. He points to DIRTY HARRY, FRENCH CONNECTION et al. BADGE 373 gets a little look in but thank god for that.