‘Shit, Still Saigon’. This is the phrase with which those of us, longer in the tooth, think of. Another APOCALYPSE NOW. So far we have had the original, theatrical release. Then came APOCALYPSE NOW REDUX (pronounced as Coppola states as RE DUCT and not RE DO). The original was well known, the second add some 49 odd minutes of extra footage. The new version APOCALYPSE NOW FINAL CUT, loses 20 minutes from REDUX but still adds more then the original had. 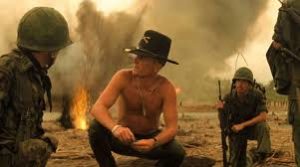 I am gonna stand back from running over the film full coverage but I need to add the story for any who are unfamiliar. The Vietnam War. 1969. Saigon. Captain Benjamin L. Willard ( Martin Sheen) has just been given a mission. Find and terminate the believed to have gone insane U S Special Forces Colonel Walter E. Kurtz (Marlon Brando). Now Willard is on the DeNang river in a patrol boat with a small crew. He is going up country to find Kurtz. Into the Dark Heart of the country and its omni present jungle.

Ok So the first thing is, you get all three versions to compare! So you can see the progression of the film. You see the original and how tight it is. You see REDUX and some of the bloating on the scenes. Then we have the FINAL CUT. This will not be the final word in APOCALYPSE NOW folklore. That is still held by the Assembly Print 500 odd min version.

What the FINAL CUT does bring to a close the complaints leveled at the REDUX version. REDUX needed trimming. It felt erratic and the narrative snaked along. FINAL CUT does blow away elements of this. The trims give the film range. The insanity is given fluidity. It constructs and defines the surreal notes better. In its completion, you finally get the noise and fury, in sharper richness.

4K has been described as striking. I wouldn’t go that far. It’s better than the APOCALYPSE NOW Blu Ray that was around. The print is colour and light corrected. The grain is completely absent and the best thing is that the final act is delicious. However it did not blow me away. See the 2001 4K transfer to see why. 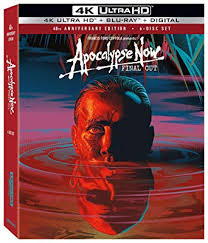 Right. Lots of old stuff resurfaces. The important stuff is that you get all three versions of the film in at least HD. Nice enough. You get HEARTS OF DARKNESS. Great documentary and with a commentary from the Coppolas. Seen before yes. Right the other extras about sound is just an ad for the company. The Soderbergh conversation is frankly terrible. Soderbergh is a great filmmaker but not a conversationalist. I really liked NEW: A history of Apocalypse Now on Home Video. Like a voyage into my video shop past.