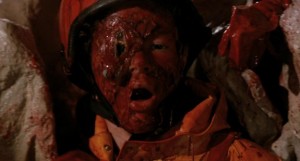 Awaiting the return of a spaceship from a mission to the moon, a famous scientist talks about rocks on a television show. The spaceship arrives with out a soul on board and strange rock seems to have spread across from its landing site. While this is going on said scientist has a vision of horror and murder that haunts her. This vision however does not stop her from visiting some local caves with a few friends and spending time exploring the underground cave elements. 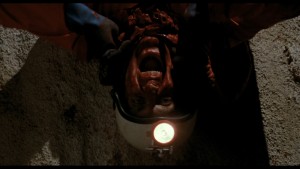 An unofficial version of Alien that was only created (as so many Italian exploiters were) as a cash cow for the studios. Alien 2 is both poorly plotted and very badly produced in places. I have seen some gems of trash and bland cinema but this wins hands down. It has laughable plot devices and often ignores logic or even common sense cinema. By this i mean the suspension of disbelief is slapped and punched out of the room. Its pacing is weak and very unbalanced and all this combines to make the average viewer dulled.

This said however the film itself has one massive saving grace, which the Blu producers have noted and added a superb test reel. The visual effects are very well executed and create some truly impressive scenes. The print has brought these out as well. Does this forgive the poor film? Maybe…

The Roth interview is so/so but I loved the art work on the shell and as always appreciate that 88 films are a unique voice in a market place where the few are becoming too similar to be alternative.