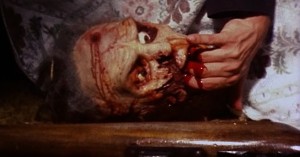 The dead are walking the earth and the only hope is the ramshackle Zombie Squad. They might not be the best at what they do but they are the only ones that can stop the rot. Some are injured in the process and will slowly turn into zombies. Others are stuck chopping and killing their way through most of middle America. The daily grind meets the daily death. Horrors seem endless until a chance discovery. When the medical teams doctors suggest that a cure for the zombie plague might be found at a nearby town, they have to go and find it, to save mankind. 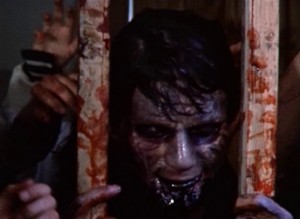 This is the in joke and 8mm classic that many though they would never see. It might be fair to say that its producer Sam Raimi was looking back on his own work when he funded this. It has the tongue in cheek humour, silly but clever in jokes and that rather excessive vibe of blood, guts and gore. Take the film as the original non Romero sequel to Day of the dead and sprinkle in a healthy amount of Living dead trash and you have this film, albeit in a lower budget form. Is it great, not exactly. It is simple cult shlock of the highest order. I liked it for the simple fact it is ambitious (I know I always harp on about that but it is a great thing for a film maker to see.) I remember having an 8mm camera and not being able to pull off even 10% of this film. This alone is worthy of admiration and a lot of respect. The film makers are heroes and make a film that is worthy of praise.

88 films give us much to enjoy as extras. Features on the restoration are okay. As is the Behind the scenes. The outtakes are funny and the booklet is a great addition.