Jake ‘Tiger’ Sharp is a former prisoner and cop that was forced out in disgrace. He killed a criminal that has some very powerful friends after he escaped killing his partner. Now he is out and wants to forget the past. He returns to his childhood home, a rundown and ramshackle shack out in the woods. Wanting to keep a low profile he spends his days going to the shop and walking in the woods. On his return to his home one day, he finds his long lost daughter waiting. A local group of thugs start harrasing Jake and they go so far as to kill his new found pet. This drives him to beat them up and warn them off. His daughter invites her friends down to give her company but the group begin giving them unwanted attention. Jake has to step in again. They attack and kill two friends and this leads to a mighty escape and fight for their lives. 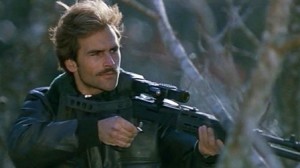 He is a lover not a fighter...

Italian exploitation and interpretation films of the late 70s and early 80s are filled with these alternative versions of Hollywood films. Yes every major country and film industry makes films like others that are popular. Take Hindi (Bollywood) films that are direct rip offs of succesful western made films. Take Hollywood rip offs of Korean or Hong Kong film. Even take British rip offs of American, Japanese and french films! In fact the rise of Italian cinema can be directly related to the rise of the great post war film screenings of Japanese films. Kurosawas Yojimbo and Seven Samurai made into great westerns that brought in millions in money and audiences. So what is Blastfighter a version of? this is very much a version of the hit film Rambo. Jack is John and the local town gang are the police of Rambo.We have the wilderness and we have the helicopter. It also is in some respects a more interesting film than Rambo. 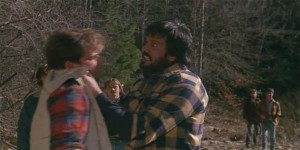 It borrows from Deliverance and even I Spit on your Grave ( A little at least in honesty.)
It wants to explore the idea of isolation and redemption. It wants to give us a person that is destroyed and being pushed further into themselves. It also wants Lamberto Bava (Son of Mario) to show off his film making skill. He makes his best and most rewarding film. It has great pacing, great story telling and a fantastic set piece ending. The lead (payed by Michael Sopkiw) is human and tender. He is also fragile, compassionate and intellegent. George Eastman gives us a dynamic and measured performance (he can act!) The film making is clever and the use of composition add texture and make a short of wilderness both interesting and heart stopping. The only down side is the blah insert shots with rifle scope image. Why is this done though? It is to give a strange brutal vision of people and hunting. This lifts it out of the fodder and ordinary and into the great and good. I had seen this before as a kid and I liked it. I was lucky to see some pre cert films and this was one of them. The Blu ray does justice to it. It is a great watch and should be seen. 88 Films have made a great film available again.