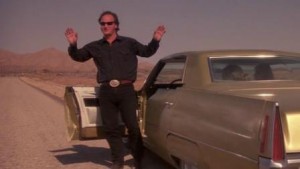 In a desert region in the middle of America, a top secret research base is about to resolve the question ‘can we travel back in time?’. The scientist at the helm has recorded the event and now has the means to move back to a previous time. Alongside this is the journey of Frank, who is a real wild creature and his wife Rayanne, who is a silent majority. He is about to spill blood and cause carnage. Problem is that he has now just offered Karen a ride to the nearest services. She is stuck in the middle of the deserts burning sun after her car broke down. Now Frank is going to become something else,  he is going to stop at the services and deal with every issue he has with his life, wife and self. 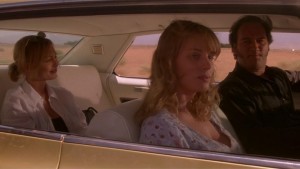 This film is a very complex case of how 90s action films, first time directors and genre films came to the fore.  These were often built on one of two things, either a very charismatic and creative director or an actor with presence and power. This film is the latter in droves. Belushi is the wired, crazed presence that holds the film together and occasionally pushes it over.  He gives us a performance that is less acted and more his expelling of anger, frustration and personal issues. It is comedic in places and that is intentional, it is violent in places and that is intentional but it is also representative of the 90s cinema, great idea but loose execution and that is less intended.

Its a belter for a weekend film in truth. Its explosive and action filled, its smart in places and makes the audience commit enough to make you care. Now the disc you are given for your dough is not filled with goodies but it has a delightful package and its not expensive. So in the words of my former PE teacher when we were to take a penalty kick….’What you waiting for….’