When thinking of the world’s leading action man, there’s one name which springs straight to mind – Liam Neeson. To celebrate the home entertainment release of his latest action thriller, RUN ALL NIGHT, available on Digital HD 27th July and on Blu-ray™ and DVD from 10th August, we take a look at Liam’s biggest and best action thrillers to date. From Non-Stop to Taken and from The A-Team to Run All Night, Liam Neeson is the ultimate action hero – here’s why. 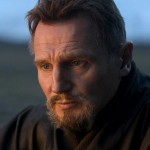 Neeson plays Ra’s Al Ghul in Batman Begins. Ra’s Al Ghul was a mentor and trainer to Bruce Wayne under the name Henri Ducard and recruited him into the League of Shadows, a secret society whose stated purpose was to restore balance to the world by enacting purges at various points in history. He wanted Wayne to destroy Gotham City, “If you devote yourself to an ideal, and if they can’t stop you, then you become a Legend, Mr Wayne.” In an ironic twist, Batman eventually puts a stop to Ra’s Al Ghul’s nefarious scheme using the very same skills Ducard had taught him. Ra’s Al Ghul’s weapon of choice was always a sword. 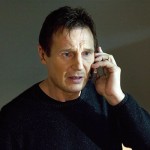 This guide to Neeson’s action hero superstar status wouldn’t be complete without Taken. Liam Neeson kills a whopping 31 men in this fast-paced, action packed thriller in which he plays Bryan Mills, a retired CIA operative with a “very particular set of skills.” He tears his way through most of Europe, killing anyone who gets in his path to save his daughter who has been ‘taken’ – of course, Bryan promises to find and kill them. 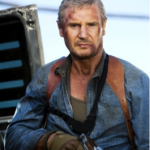 In this 2010 remake of the TV series classic, a group of Iraqi war veterans set out to clear their name with the U.S. military. The four men including Col. John ‘Hannibal’ Smith (Liam Neeson) are accused of stealing plates which could print 100 dollar bills but the team were framed. The shamed men use an arsenal of weapons in this action packed blockbuster ranging from hand guns, machine guns, rifles and grenades to clear their name and stop the bad guys. In this hit film Hannibal is known for his saying, “I love it when a plan comes together.” 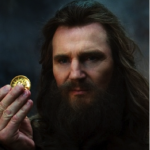 Zeus (Liam Neeson), King of the Gods, launches into battle with his brother Hades over power in this tale of the Greek Gods. When Zeus announces, “release the Kraken”, a mythical sea beast, audiences witness his most powerful weapon.  Neeson reaches a death toll of six in this fantasy thriller. 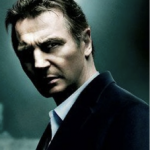 After a serious car accident in Berlin, Dr. Martin Harris (Liam Neeson) awakes to find his world in utter chaos. His wife (January Jones) does not recognise him, another man is using his identity, and mysterious assassins are hunting him. In this European thriller, Neesons most egregious crime is stabbing a man to death with his weapon of choice; a glass shard from a mirror. Though his character loses his memory, he claims, “I didn’t forget everything. I remember how to kill you.” 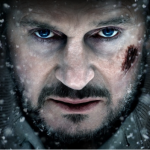 After their plane crashes in Alaska, six oil workers are led by a skilled huntsman, Ottway (Liam Neeson), to survival, but a pack of merciless wolves haunt their every step. Neeson only kills wolves in this epic arctic adventure but his kill count is up to two as he stabs and shoots the unrelenting creatures. Ottway is often heard repeating this phrase in the film, “Once more into the fray. Into the last good fight I’ll ever know. Live and die on this day. Live and die on this day.” 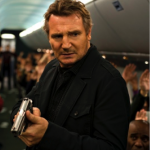 Federal Air Marshal, Bill Marks (Liam Neeson), springs into action during a transatlantic flight after receiving a series of text messages that put his fellow passengers at risk unless the airline transfers $150 million into an off-shore account. Set in airspace, Neeson must convince the passengers, “I’m not hijacking this plane. I’m trying to save it.” In the action packed sequences he kills two people, by breaking one man’s neck and shooting the other in the head. His main weapon of choice in this film is the firearm, which he is seen toting throughout the movie. 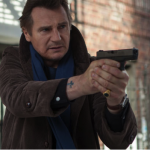 In this dark and intense thriller Neeson declares, “I do favours for people and in return, they give me gifts. So, what can I do for you?” Neeson plays Matt Scudder, formerly part of the NYPD, who now works as an unlicensed private detective. His latest client is a drug trafficker (Dan Stevens) whose wife was kidnapped and brutally murdered. On the rough streets of New York, Neeson notches up his kill count to four in this movie. 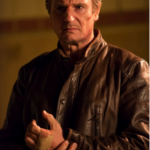 Long time hit man Jimmy Conlon (Liam Neeson), best friend of mob boss Shawn Maguire (Ed Harris), has seen better days. However, when his estranged son (Joel Kinnaman) becomes a mob target, he’s back to his old dynamic ways. Action ensues as Neeson charges through the streets of New York to prevent son, Mickey, winding up dead. With his gun in hand, he threatens, “as long as you’re coming after Michael, I’m coming after you.”