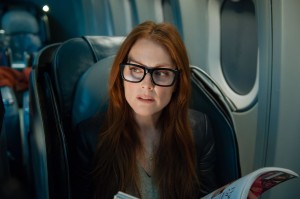 Non-Stop director, Jaume Collet-Serra, has an interesting catalogue of films to his name including the Paris Hilton House of Wax, horror Orphan, and 2011’s crime thriller with Liam Neeson, Unknown. Neeson and Collet-Serra has reunited for a second time with Non-Stop, which is a great addition to Neeson’s recent liking for these quick paced stories since working on Taken.

Also starring Julianne Moore, Scoot McNairy, Michelle Dockery (Downton Abbey) & Lupita Nyong’o (12 Years A Slave), Collet-Serra’s fast paced thrills keep audience pumped right from the very start. Neeson plays Bill Marks, a federal air marshall who is known throughout his colleagues for have a bit of a drinking problem since dealing with the death of his daughter. Like any other day in his line of work, Marks boards the plane with no one else on board knowing who he is except for the plane crew and his colleague who is also on board. Soon after take off, Marks receives a text message on his private network telling him that unless he gets 150 million dollars into an offshore account, someone on the plane will be killed every 20 minutes.

At first he calmly tries to figure out who the person is; he tries to reason with them via text but when they clam up he has to take the planes safety into his own hands. He enlists the help of the woman sitting next to him, Jen Summers (Moore) who he believes he can trust and stewardess, Nancy (Dockery) as they try to pick out the mysterious looking people on the plane and anyone that may look like they have something to hide. They pick out several people including Marks’ colleague, whom of course Jen and Nancy do not realise is working with Bill. But as times goes on and it looks like someone may die, Bill confronts his colleague to find out that actually he was smuggling drugs for the unknown assailant and just as the 20 minutes is up, Bill kills his colleague when their discussion turns nasty. Soon the lines between officer of the law and drunken terrorist on the plane blur and people start to question Bill’s own mind and reasons for scaring people on the plane – things get worse for him when the crime agencies on the ground find that the offshore account is in Bill’s name. 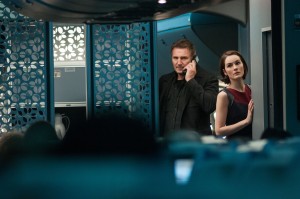 arrested himself for the deaths. The film’s big money sequence is when Marks figures out there is a bomb on the plane, which he must find and disarm before every single person on the plane is killed. He ignores those on the ground, who tell him they will no longer negotiate with him after believing he is a terrorist and he is left with the help of Jen who is the only person that believes him. When ultimately, the twist is revealed about who has been playing this game all along, Bill must stop the bomb and capture the killers whilst the co-captain tries to land the plane without blowing themselves and everything around them up.

For an average American crime thriller, this is very by the books; there are guns, there is dramatic music to heighten the suspense, there are twists and turns along the way which cause the audience the question everything before the big explosive ending where everything is cleared up neatly. Yet Non-Stop is hugely enjoyable, thrilling and a lot of fun.

The performances, in particular from Neeson and Moore are great (except the reason why Jen flies around a lot is a little weak) and their chemistry on screen really keeps the film alight. What is even more impressive about Non-Stop is that Collet-Serra keeps the suspense going throughout the film and it never gets boring. He really utilises and understands how to use his one location, and an intense feeling of claustrophobia is rife throughout. On par with films like Red Eye, Non-Stop truly delivers with what is says on the packet.