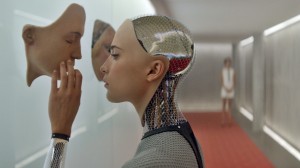 What is EX_MACHINA other than one of the most interesting, beautifully made science fictions films created in years. Directed by Alex Garland (in his directorial debut) and starring the outstanding Domhnall Gleeson, Alicia Vikander and Oscar Isaac, EX_MACHINA follows up with every promise it makes; gripping, future psycho-techno-thriller-drama. It takes every film that tries to understand AI and waves two fingers at them because this is the real deal.

Caleb (Gleeson) is a young computer programmer working for Nathan’s (Isaac) search engine company. He seemingly selected by random in a company wide competition to visit Nathan in the far off outreaches of the mountains and witness his research facility first hand. Then Nathan reveals that he has been working on AI and the reason for Caleb’s visit is to take part in the Turing Test, where the tester asks questions to determine whether they are talking with a robot or not. If they don’t believe they are talking with a robot, then of course the AI has been a success. But this test is a little different and Nathan doesn’t hide that Ava (Vikander), his AI project, is a robot. If she can get push Caleb to believe in her own consciousness even with his knowledge that she is a robot, then she is far more powerful than anything ever created.

Caleb meets daily with Ava, with a glass partition between them both as she isn’t allowed to leave her own personal space. The pair talk and Caleb first comes to their conversations thinking like a scientist but soon his heart gets in the way and Ava begins to tell him that she is falling for him. Caleb feels the same and when she tells him not to trust Nathan (who is watching and monitoring their conversations), he begins to feel conflicted. Worst of all is when Nathan reveals to Caleb the ultimate ‘death’ of Ava when he goes on to create the next prototype in his project and ultimately Ava’s memories will be wiped.

EX_MACHINA then becomes a film about survival and human emotions; at what point does your own humanity get in the way and cloud your 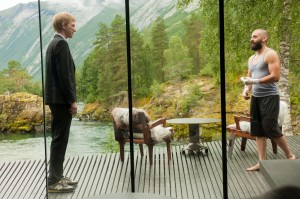 knowledge and wariness about the world around you. Caleb starts to stop trusting Nathan, which is ultimately the point of no return as he plays a dangerous and in the end fatal game of cat-and-mouse between Ava and Nathan, never quite sure who to believe. The twists and turns of the film are subtle enough to force a gasp from those watching closely, but they aren’t big shocking moments, which massively disrupt the smoothness of the narrative.

Garland’s directing is like his writing, smooth and perfectly structured. Visually, EX_MACHINA is stunning; futuristic and technology loving, he visually matches the minimalist futurism of the inside of the house with the beautiful blues and greens of the outside. There is always this tension between the past vs the future, humanity vs technology. But it is Ava who is completely outstanding on screen, her body like a robot (think I Robot but years later with better design) but she has a human face. She glides across the screen, completely and utterly setting it alight as she moves. The moments when Ava puts on women’s clothes are Garland’s way of visually illustrating the tension of the story – they are thrilling, scary but illuminating at the same time.

The performances from the central three are extraordinary as well, Gleeson stands out as a sane man on the edge. He bounces off his co-stars, whether it’s philosophical conversation with Isaac or a mysterious kind of love with Vikander. Garland cleverly juxtaposes the relationships between Caleb with both Nathan and Ava; both are volatile and unsure relationships and both potentially promise a future of excitement and wonderment. With Ava, her sexuality is constantly in question but also the consequences of falling in love with a robot. When Ava wears the women’s clothes, she poses the question about reaching a moment of femininity; can be accepted as a woman? Whereas with Nathan, he creates a kind of homosocial environment with Caleb. The two men drink together and Nathan even suggests a dance. He is often wearing little clothing and he lets his masculinity emanate across the screen through physical exercise but also his body is admired by the camera.

It would not be hyperbole to suggest that EX_MACHINA is a new kind of science fiction masterpiece; it’s reminiscent of the old stories of robots and AI but also introduces a new kind of story where it’s less them vs us and in fact a look at how we can live in a world together because ultimately, as the characters in the story think, it could be the case one day.