Win When The Dragon Swallowed The Sun on DVD
Home
Competitions

Win When The Dragon Swallowed The Sun on DVD 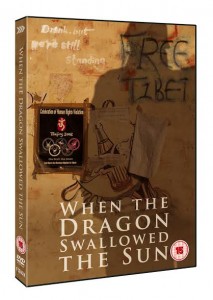 With appearances by His Holiness the 14th Dalai Lama and Archbishop Tutu.

Why hasn’t Tibet been freed? Who is keeping the movement from going forward? From director Dirk Simon, When The Dragon Swallowed The Sun is a groundbreaking documentary that examines these questions in a quest to understand why the world is still dealing with unsettled issues like the Tibetan cause and what can really be done to eradicate them.

Seven years in the making, When The Dragon Swallowed The Sun is the first inside look at the Tibetan movement to free Tibet from Chinese occupation, its internal conflicts and contradictions.

The combination of full HD footage from India, China, Tibet and the US along with a prologue narrated by Dennis Haysbert and an original soundtrack by Philip Glass, Thom Yorke and Damien Rice make this the first film that presents the complexity of the struggle with such emotional impact. The film features Richard Gere, Archbishop Desmond Tutu, the 14th Dalai Lama, the newly crowned 18th descendant of the Great Religious Kings of Tibet, some of the most prominent Chinese contemporary artists, and all the key figures of the exiled Tibetan freedom movement and their followers.

Check out our review here.

We have two copies on DVD to give away.

Who directed When The Dragon Swallowed The Sun?