Couple in a Hole Review 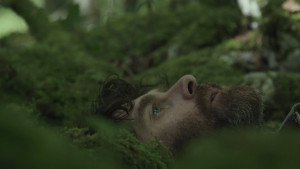 Tom Geens’ Couple in a Hole is a stunningly captured, captivating and deeply emotional journey into the wild and worn out heart of darkness of a couple who have lost everything. John (Paul Higgins) and Karen (a powerhouse performance from Game of Thrones and The Witch actress Kate Dickie) are a Scottish couple who live in an all engulfing forest in the French Pyrenees. Something has happened to them and they have reverted to living like savages with Karen spending her days in the hole that the couple have come to call their home and John, like the hunter gatherer, returning each day having looked for food.

Something has broken Karen though and she is terrified of leaving the confines of her space – this is the only place she feels safe. Yet the audience are constantly having to question what brought them here, what made them as they are. Couple in a Hole looks beneath the surface of these characters and digs deep under the skin of it’s audience. One day, when Karen is bitten by a spider, John must trek into the nearby town to get some medication where he becomes friendly with a local farmer, Andre (Jérôme Kircher). For some reason Andre takes a particular interest in the couple’s situation but his wife, Celine (Corinne Masiero) warns him to stay away.

As the films goes on, it becomes clear that John craves for human interaction, especially as Karen grows further 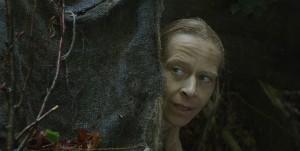 and further away from him. As she physically and mentally falls deeper in the hole and away from the real world, John spends his time hanging out with the farmer. These two worlds that John finds himself in collide in a thrilling and fiery climax, which leads to a stroke of violence that makes the audience jump from their seats.

Geens’ film is beautiful – his camera explores the surroundings of the forest and whilst at first it seems there could be no one around for miles and miles in the vast expanse of the forest, when he reveals that the locals aren’t too far away a sense of claustrophobia is created and it turns out that Karen and John’s world is actuality very small. The camera spends time getting to know the central two characters, filled with close ups that force the audience to get to know the characters intimately plays wonderfully against the wide shots of the world around them.

The performances from both Higgins and Dickie are extraordinary – they play off of one another in way so intimate and so rarely seen on screen. They fill the screen with their emotions, their facial expressions and their movements that even for the lack of dialogue it seems a story is always being told. As their world starts to crumble, Karen starts to feel John’s betrayal to her and John feels Karen’s madness becoming too much for him, the audience are fully involved and when everything becomes clear it is shocking.

The techno soundtrack from Beak is uncompromising and adds a further layer to the story and the film. It breaks through and adds a careful juxtaposition to what is often being shown on screen.

Couple in a Hole is unlike anything else to have come out this year, it’s intense and beautiful, full of life and yet so shrouded in death and the darkness that the characters find themselves in. It’s one of a kind.