On the surface of it, a film about the journey of a Laotian family written and directed by an Australian does not necessarily inspire but Kim Mordaunt knows South East Asia very well having lived and worked there for many years. Mordaunt displays a strong knowledge of social traditions and a love for the beautiful landscape of Laos that conveys his familiarity with the subject. Despite this, the narrative structure betrays him, an Asian story told in a recognizable Western style means that The Rocket never truly feels like a glimpse into Laotian life. Tenderly shot and moving in parts as this feature debut is, it is almost too easily accessible for it to be properly satisfying. 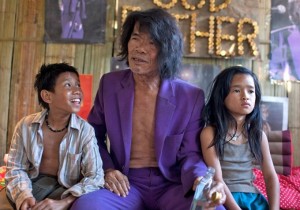 It seems a strange thing to criticise a film for being too easily understood but with foreign cinema, particularly that coming from further afield than Europe, much of the thrill lies in the deciphering of a narrative. That little bit extra work that may be needed to understand strange customs or unfamiliar dialogue patterns can gratify the spirit of discovery.

The film begins with a distressing birth scene in which a grandmother tries to convince a mother to get rid of both of her children because they are twins, the tradition is to dispose of twins due to the belief one of them being blessed and one of them cursed but it is impossible to tell which one is which. The mother manages to save one child as the other dies in childbirth, claiming they were never twins. 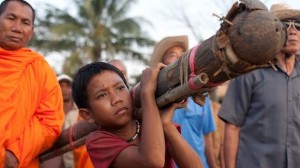 After this troubling Laotian custom is complete and the surviving child is named we flash forward several years. The family is to be moved to a new town so that an energy company can flood their valley as they expand a dam system. Ahlo (Sitthiphon Disamoe), the surviving son, is adamant they bring his boat with them but in a freak accident his mother is killed and it seems as if Ahlo may well be the cursed child. The story follows the family to temporary residence where Ahlo again causes more trouble leading him to seek redemption. He chooses a rocket competition to try to show his family he is not cursed and hopes to ease their troubles with the winnings.

The story is in general fairly twee, the customs of Laos and its wild beauty are wonderfully captured but not enough is invested in each section of the narrative to build up a relationship with the characters. Ahlo often comes off as annoying, despite mild moments where his resolve endears and his relationship with Kia (Loungnam Kaosainam), a young orphaned girl he comes to befriend,  never fully develops. Kia’s James Brown obsessed Uncle Purple (Suthep Po-Ngam) adds a comical edge to the proceedings, his drunken antics providing relief from the perfunctory storytelling. 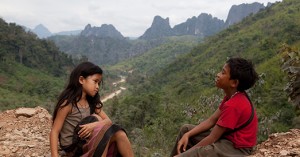 The situation in which this family finds themselves is dire. Moved from their home, they lose their matriarch and find themselves living in a shanty town, bereft of most of their already meagre possessions. Their search is for paradise but the tone feels too light given their strife. Granted the movie is designed to uplift, a classic tale of success against all odds, but if a story is highly unbelievable you cannot expect every member of your audience to swallow it. This feel-good movie may entertain some but many will see it as a Hollywood story albeit with different packaging.

The Rocket is released in cinemas from March 14th courtesy of Eureka!