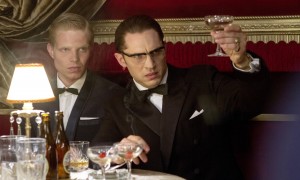 Legend is a new telling of the dark history of London’s most infamous gangster twins, The Krays. Most notably remembered for being played by Martin Kemp and Gary Kemp in Peter Medak’s 1990 film, this new version sees Tom Hardy taking on both the roles of Ronnie and Reggie Kray. Based upon John Pearson’s book, The Profession of Violence, Brian Helgeland’s (who wrote the screenplay for L.A. Confidential) intelligent and gripping new film focuses on the lives of the twins through Reggie as he meets his wife, Frances (Emily Browning) and tries to help control his brother’s manic and unstable tendencies as he comes out of hospital.

There is always a great question of whether it is worthwhile to tell a story over and over again; books, television, films – there has always been interpretations and stories of the Kray Twins, but Helgeland’s film is accessible, exciting, often very funny, thrilling and features possibly the best male performance of the year with Tom Hardy playing both the brothers. Narrated by Frances, Legend finds the brothers at a pinnacle point in their reign of London. They have already captured the attention of the police as Nipper Read (Christopher Eccleston), a constable on their tail who is already heading up a task force on the brothers and their activities, people all around East London know the pair and they are respected. But what they want next is bigger and better, they want the whole of London. The way this was done? Remove rival networks and then take over various pubs and clubs, gain ownership and have the main chunk of money going through these establishments. The rest; the violence, drugs, prostitutes – this wasn’t discussed, just assumed.

The Krays make a deal with Americans; this ensures that capital is moved quickly and quietly and they are able to take a chunk of the top for themselves. Their business manager Leslie Payne (David Thewlis) goes to great lengths to ensure the business always looks, on the outside, like a well structured machine – above board and legal. But Ronnie has a problem with Leslie and doesn’t trust him, in fact he doesn’t trust most people. When Reggie gently persuades a psychiatrist to say in court that Ronnie is of sane mind and to be released immediately, he doesn’t realise the monster that he is going to have to control for years to come. Over the course of the film various stories are played out; Reggie’s courtship of Frances, the brothers ownership of Esmeralda’s Barn (which allowed them to expand their criminal activities throughout the West End of London), the brothers relationship with their mother, Ronnie’s homosexuality, all the way up to the murder of Jack “the hat” McVitie.

The only criticism of Legend is that feels just a touch over long, but when one looks at the amount of information fit into the film and the years that it covers, it

makes complete sense. Not one part of their history in the film is glazed over but instead explored and understood, fully immersing the audience into the Swinging Sixties of London. On this note, Helgeland and his crew have done an extraordinary job in transporting the audience back 50 years; the locations, costumes and music are so prevalent and important to this era that their inclusion enhances Legend fruitfully – creating a realistic world, which is so effective. But the absolute standout element is Tom Hardy’s performance as both Ronnie and Reggie. Not since Lindsay Lohan did it in The Parent Trap, has one actor playing siblings been so effective and fundamental. Hardy has studied and studied hard; he manages to contort his body in different ways for both men, their speech is different and their violence is different. One very quickly forgets that it is the same actor playing both roles because he so embodies both the twins and neither one is more present on screen than the other. He manages to find the thin line between the humour of the boys, their violence and psychoticness and their serious business minds. Whilst at first they aren’t on screen together, soon Helgeland wants to show Hardy off and the pair share scenes and find themselves sitting next to each other – it is really quite extraordinary. This builds up to the incredible fight sequence in the middle of the film between Ronnie and Reggie – that’s right, Hardy vs Hardy and it’s everything you could ever imagine.

Legend works on so many levels; it explores an important and integral part of London’s history, it marks an exciting new chapter in the career of one of the UK’s best actors working today and it is an rather wonderful example of a kinds of intelligent thrillers coming out of the UK today.