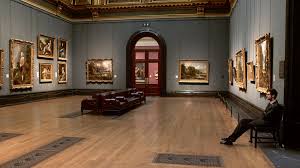 This most revered of galleries is an institution with its 2400 paintings and masterworks from the 13th to the end of the 19th century that has garnered worldwide respect, but can also easily be taken for granted by the public.  But Frederick Wiseman’s documentary aims to convey the painstaking work that goes into making The National Gallery what it is, and just how many wonders this institution contains. And it does succeed on one level, and on another….well let’s just say it depends how much you like people talking about and interpreting artworks.

Wiseman’s cinéma vérité approach to documentary is certainly takes a while to get used to, he is an impassive presence and doesn’t use the traditional talking heads or guide the film in a formal way through any narration. Instead we are given a series of observations or vignettes of the gallery at work. We observe the public’s keen absorption in the paintings, are let into some board meetings where they discuss whether to get involved in a major event and financial matters and view life drawing classes and an art workshop with blind people who visualise a Pissarro painting by being given a tactile version (a practice I was previously unaware of).  We also see, in what is the most engaging aspect, the curators and scholars discussing various artworks to people and scientists/restorers discussing the complex and delicate process of restoring an old painting.

You certainly learn a lot about some of the paintings at the gallery and makes you feel more informed about art afterwards, guided as you are 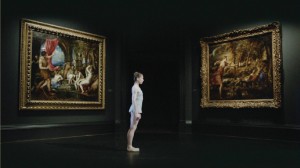 through many of the Gallery’s key pictures by engaging experts who highlight historical context and bring the pictures to life. The most engaging of the talks included a funny informal talk to schoolchildren about the biblical paintings (“If you get bored of looking at Moses, you can look at lots of other pictures”).  We listen in on a talk about Rubens’ Samson and Delilah which becomes a “beautiful spy story” with Rubens a “psychological master” in portraying the inner anguish of the torn and ambiguous looking Delilah betraying her lover for her country.

We also hear theories behind meaning behind Holbein’s famous distorted elliptical skull in The Ambassadors with its suggestion of never knowing when death will come, and hear the joy the curators get in looking at Leonardo’s pictures in its blockbuster exhibition  under x-ray and discovering the vastly different revisions of paintings. To seeing just how delicate it is to restore a painting, and retain its original colours and intention, as well as the mistakes of previous restorers with harsh chemicals. It also great to eavesdrop on the (soon to be ex) much liked director Nicholas Penny himself talking to who seems 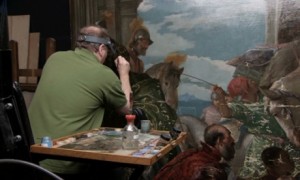 like friends of his about the acquisition and arrangement of Titian’s Diana paintings (telling anecdotes of a former owner, a French duke, who was an art-collector and one of the first aristocratic amateur cooks) and making one wish you had such an erudite and knowledgeable friend like that to guide you round a gallery. At the end we see the collaborative work The National Gallery inspires through commissioned poems on the Gallery’s paintings, and an interesting contemporary ballet from The Royal Ballet inspired by the Titian Diana paintings we have seen Penny talk about showing the gallery’s influence on the art world at large.

There is a genuine delight and passion for the paintings conveyed in this film and it is infectious, although after a steady stream of talks and not so interesting boardroom meetings it does get a tad repetitive and monotonous. But if anything it makes you re-appreciate this free national treasure and that’s worth celebrating.