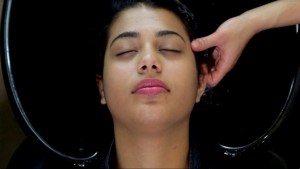 Women in Sink is a unique and fascinating cinematic experience – it’s so simple visually and yet in terms of what the film is talking about – so full of life and meaning. Director, Iris Zaki, got herself a job in an Arab hair salon in Israel, installed a camera above the washbasin where she washed a huge variety of women’s hair – both Arabs and Jews – and speaks openly and honestly to them about politics, life and love.

It’s a short documentary, but one that is timely and long-lasting – leaving the audience with plenty to think about afterwards. Clearly Zaki has given the film plenty of thought because it could have lasted double the length, but it would have likely grown repetitive and so rather than letting a filmmaking ego get in the way, she has clearly considered the needs and wants of her audience and figured out a way to get message across concisely and clearly in a shorter period of time.

The women that Zaki chats with are all different – they have different experiences, thoughts and beliefs but what Women in Sink does do is leave the audience with an optimistic hope for the future from the people on the ground living and working together – something so fresh and meaningful. What is also so interesting about this film is how it really shines a light on the lack of women’s opinions that are made public about what is happening in the Middle East. They are living in a very male dominated landscape and this film gives them an opportunity to speak from experience and about their own thoughts for the future. 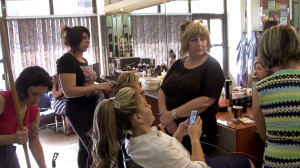 themselves the mouthpieces for their generation but instead understand the complexity of the world they live in and how that has changed over generations. The sense of community in the salon itself is also illustrated by Zaki and proves that Arabs and Israeli’s can live peacefully together – but hopefully this will is the start of a long process of proving to people that through respect and love, it can happen.