With this title and a lead character called Eric Love you might guess that this was a tale of a wannabe pop singer or perhaps a trainee accountant who dreams of a more glamorous life – you’d be wrong. Starred Up is a prison drama that hits you right between the eyes with a visceral power not seen since the days of Alan Clarke. 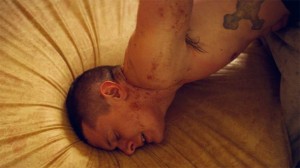 This Eric Love is a violent criminal who despite his tender years has been ‘starred up’ and placed in an adult jail. There’s no doubt that Eric is a dangerous man and early on this film plays like a straight version of Nicolas Winding Refn’s Bronson. However, this doesn’t last, and Starred Up develops into a far more real and involving story.

The film opens with Eric’s inception into the prison, a dehumanising series of procedures, before he’s banged up in his cell. Eric has to find his way in this intimidating world with it’s own unwritten rules and alliances.

Throwing a spanner in the works is the presence of one old lag called Neville (Ben Mendelsohn) who just happens to be Eric’s dad. Nev is an intense presence who can flip without warning between concern and intimidation. Mendelsohn puts in a characteristically captivating performance confirming him as one of the finest screen actors working today.

The camera takes the role of another prisoner. It observes the rivalries and unspoken communications, it sees Eric’s fear and anger, and it follows as Eric bowls down the walkways like another wounded dog in this giant kennel. There’s a growing sense that Eric and the other inmates are caged animals with the Victorian surroundings and harsh sound effects adding to the feeling of brutalisation. What this film does, with Eric as our guide, is dismantle the prison system piece by piece.

In many ways it is a standard prison drama featuring violence, the prison ‘Daddy’, drugs, corruption, cigarettes, the childlike hierarchy of treats (a Mars Bar is near the top), and the liberal volunteer (Rupert Friend) trying to make a difference. But there are vital differences: Former prison worker and first-time writer Jonathan Asser has written a script dripping in authenticity to rise above the usual prison clichés. This is aided by a uniformly strong cast and an on form director. Here David Mackenzie realises the promise he had shown with previous films such as Hallam Foe and Young Adam to establish himself as a major British director.

At the heart of it all is Jack O’Connell as Eric with a performance of raw truthfulness. As with Tim Roth’s volatile Trevor in Alan Clarke’s Made in Britain the more we watch Eric the more we feel for him and the more we doubt the system he has become a part of.

It’s a hard knock life but Starred Up shows that with vitality, humour and an unflinching eye it can be unmissable cinema. Critics and audiences went mad for A Prophet – this is better.