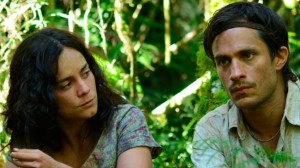 Pablo Fendrik’s The Burning is an extraordinarily beautiful piece of cinema; stunningly captured, delicately acted and grippingly written; it’s a genre bending adventure as exciting as emotional. This touching piece blurs the lines between the power of drama, of romance and of the Western and in turn becomes stronger and better by bringing this all together. Starring Gael García Bernal in a breathtaking role (and possibly career best) as Kai, the mysterious warrior who has emerged to save Vania (Alice Braga), the kidnapped daughter of a farmer who has been killed by mercenaries, looking to take over his land.

The audience are told from the start that people living in the Argentinian rainforest often partook in rituals, believing that something or someone was to come from the water to look after them and save them when they needed it most. Fendrik never intends to let the audience forget this, allowing the water to smoothly flow throughout the entire film, cutting directly through the middle of the land the characters find themselves in. To begin with Kai is introduced as looking at to the water, whether he has come from there or another world, he is needed. A farmer is in trouble as he has watched fire and havoc wreck the world around him; the forest burns as do the farms. But he has no intention of letting his land go and entrusts Kai to look after him and his daughter.

When the savages do end up coming, they force the farmers hand violently getting him to sign over the land to them before brutally killing him and stealing his daughter. Kai knows this is his first mission; to save Vania by whatever means possible. With the hearts of the audience in their throats, Fendrik wastes no time following the group until Kai finally attacks and saves Vania for being raped. But in this saving, the couple give in to their animalistic tendencies and sleep together (in a truly arresting scene) in amongst the natural greens and browns of the world. But Kai knows his work isn’t over and he must revenge the farmer and kill this group of men. As the film goes on Kai becomes more human until the audience discover where is his truly from, yet this doesn’t take away from the man’s power and presence on screen.

The Burning by no means of the imagination is an action packed movie, but it surely isn’t meant to be. It’s poetic and deep, it goes right to the crux of

these characters. It’s also exquisitely quiet – Kai is a silent hero, facing contemplation in the face of the violence around him. Fendrik works to create an incredible atmosphere and tension on screen, the silence is deadly and it brings the audience further into the world. This is all leading up to the final show down between Kai and one of the leaders of those trying to steal the land. Giving off the “this town ain’t big enough for the both of us” vibe, it is captured so impressively on screen that you forgive the overly dramatic music and the reliance of a cliche of the genre. Never quite sure how it is going to end, the lead up to the final shot finds the audiences hearts racing because they find themselves starting to care for these characters without even realising.

Incredibly powerful and memorable, The Burning is an achievement in terms of cinematography and storytelling. Subversive and subtle, it’s deeply unforgettable.