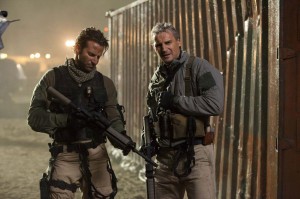 The A Team: Bradley Cooper and Liam Neeson

The infamous A Team are led by Colonel ‘Hannibal’ Smith (Neeson) with Lt. Templeton ‘Faceman’ Peck (Cooper) muscle Bosco ‘B.A.’ Baracus (Jackson) and pilot H.M. ‘Howling Mad’ Murdock (Copley) as his officers. After a mission in Iraq where the team are double crossed, kicked out of the army, and imprisoned, they vow revenge on double agent Lynch (Patrick Wilson) and escape from prison setting out to clear their names.

The film starts rather slowly with some separate introductions to the characters, but we are soon thrown into the action at full force. There are some unexpected plot twists and turns, and some great montage action set pieces as the team roll out plan after plan on their mission. Sure The A-Team was never going to be an amazingly thrilling and clever action classic, but if you take it at face value as a piece of fun and nostalgia then it ticks all of the boxes. The films only real flaws are the cheap CGI graphics used in the explosion packed finale, and the overabundance of product placement, but even that’s not as bad or noticeable as that Orange advert. 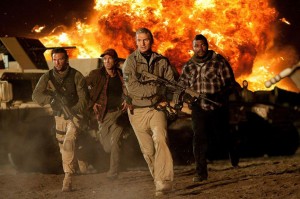 Quinton Jackson, who comes from a wrestling background, doesn’t try a Mr T impression (which could have gone down dreadfully), but instead does his own thing playing B.A. as a lovable rogue, working perfectly. Bradley Cooper is great eye candy for the girls and shows off his comedic talent already seen in The Hangover. However, the stand out performance comes from the hilariously comic Sharlton Copley (District 9), playin the crazy Murdock perfectly and with all of the best lines; the banter between him and B.A is genius, particularly with regards to B.A’s fear of flying. Generally, the overall bond between the team feels realistic and they keep up a good rapport throughout

On the whole, The A Team is pure unadulterated fun, filled with harmless action scenes that make it a perfect summer blockbuster. Be sure to stay right until the end of the credits, as there’s a surprise cameo scene that’s worth waiting for.