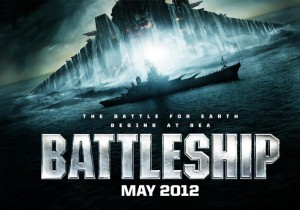 Many say that Hollywood is dumbing down. If so one can only hope it does not sink any lower that the latest toy tie-in Battleship, an overlong and ugly advertisement.

What story there is surrounds slacker Alex Hopper (Taylor Kitsch) who decides to pursue a career in the navy after falling head over heels for the General’s daughter Samantha (Brooklyn Decker). After spending the first half hour witnessing what a ‘rebellious underdog’ Alex is, he then forced to take responsibility as a fleet of puffer fish hybrid aliens attack earth with predictable results.

Battleship was never going to revolutionise cinema, but as far as an action film or even entertainment it fails on every front. Taylor Kitsch’s arrogant central protagonist is difficult to like and lacks the charm which stars like Will Smith or Brad Pitt have in spades. Therefore it is extremely difficult to care whether he or any of the other two dimensional characters live or die. Worst of all is Rihanna‘s ‘feisty’ marine who seems grossly miscast and seems to be simply another marketing ploy. The script even makes the usually captivating Alex Skarsgard and Liam Neeson seem just as plastic as the board game. This seems to be the issue with many recent Hollywood films, placing a focus on action over script and the result is dire. 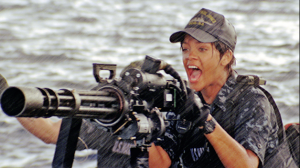 The action itself is dull apart from a couple of well choreographed and thought out sequences. Generally it resorts to being a violent barrage of deafening noise and mindless explosions with a few advertisements thrown in. This surely has to be product placement at its most obvious with everything from Doodle Jump to numerous fast food outlets being thrown in. This is minus the numerous references to the original game which are not so subtle.

The tone of this blockbuster is supposedly ‘tongue in cheek’, but often it is difficult to know whether certain lines were meant to be ironic or not. The script is poorly written in that sense, and there are several awkward moments where tasteless jokes are made at the expense of paraplegics.

In the end Battleship is little more than Transformers at sea. An overlong and tactless attempt to start another franchise sinks.