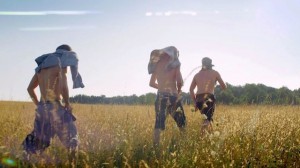 One of the essential aspects of the coming-of-age story is that in order to achieve adulthood, or at least progress one step towards it, the protagonist must separate themselves from their parents or figures associated with parenting. Stand By Me would not have the same impact if the four kids were accompanied by their folks, while 2013’s delightful The Way, Way Back portrays a slightly scummy water park as a step-father-free haven where the hero, Duncan, can emerge out of his painfully awkward shell. The Kings of Summer, Jordan Vogt-Roberts‘ charming indie that sadly struggled to get a wide cinema release, takes the idea of separation from parents to its extreme – three teenagers leave home for good and build their own house out of scrap metal in the forest outside their town. The separation is total; they presume that they can do a better job of leading their lives than their parents can, so do just that.

Where The Kings of Summer really works, however, is keeping the parents in the film. More precisely, it keeps Nick Offerman in the film. Anyone who is a fan of Parks and Recreation will know that he can hide vast reserves of emotion behind a gruff, dry exterior and in The Kings of Summer, where he plays the father of the lead character Joe, that tension between aggressive sarcasm and genuine compassion for his son is mined for the film’s most effective moments. This isn’t to disparage the rest of the film – it’s often very funny, and the relationship between the central trio feels believable if sometimes a little melodramatic – but the father-son dynamic is where it really shines. Offerman may be playing a role very similar to Parks‘ Ron Swanson, but he does it so well, anchoring the film with a maturity that is deliberately absent from the teenagers’ story.

Aside from this, Vogt-Roberts’ feature debut is strong, acting as an effective calling card for the young director. Everything is bathed in a warm glow that you could never get away with in a UK set film, although this could have benefited from being shot on film – the digital sometimes gives it an odd glare that doesn’t suit the idyllic, almost magical-realist setting. In spite of this, Kings creates atmosphere brilliantly, and a montage set to the sound of the kids banging a large pipe is a standout of the year: exciting, energetic and dizzily edited, it captures the heady joy of that feeling when you are first separated from your parents and ready to become an adult. The rest of the film suggests that it is not that simple, but it revels in the moment anyway.