The Act of Killing Review 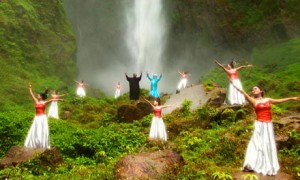 The winner of the coveted Special Jury Award at this year’s Sheffield Doc/Fest, The Act of Killing is full of contradictions and bizarre reality as old mass murderers cheerfully recreate their grizzly killings.

It is one of the hardest films to watch I have ever seen, yet one of the most visually stunning; it is over-long and repetitive yet I miss the style and the fascinating characters so much that all other films seem grey and boring in comparison.

Two hours and forty minutes, even for a director’s cut, is extremely long for a documentary; but as each scene became as bafflingly and bizarrely beautiful as the next I understood why he would want to present as much of the footage as possible.

Oppenheimer had been trying to film a doc about the ‘65 military coup in Indonesia and the subsequent massacre of 1 million suspected communists since 2003. Every time he managed to speak to survivors and the families of victims the police would arrive and break up the meeting, confiscating equipment and scaring his contacts into silence.

He was encouraged to continue making the film because so many he spoke to were desperate that the truth would finally come out. Little did he realise that those who would be the happiest to tell the story would be the perpetrators of the genocide themselves.

The film begins and we are soon introduced to Anwar Congo, a local militia leader and hometown gangster in the northern Sumatran city of Medan. Back in the 60s he was one of the young leaders of the ‘movie theatre gangsters’ who sold movie tickets on the black market. These gangs hated the communists because they banned Hollywood movies, which made the most money. 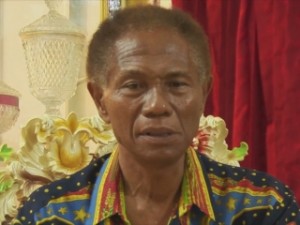 The leaders of the military coup in 1965 hired these violent profiteers and quickly organised them into death squads. Anwar and his cronies used techniques learnt from the movies to kill communists, ethnic Chinese who they assumed were communists and intellectuals who they believed were turning people into communists. Early on in the film he cheerfully demonstrates how, to minimise gore, he would use wire to strangle his victims, a method copied from a gangster film.

These re-enactments got more and more horrendous as the intimate study of these ageing gangsters’ everyday lives got more and more banal. They revel in finally becoming film stars and when the director, who is referred to fondly as Joshua, suggests that they make films of the horrible things they did in the 60s they jump at the chance.

Scenes from these super-bizarre, highly camp and very symbolic films are scattered throughout and some have to be seen to be believed.

An overweight militia general called Herman, who enjoys a close and sometimes very touching friendship with Anwar, is always in garish drag costumes. In almost every re-enactment they film he is done up to the nines, in an extravagant style only a huge south-east Asian man can pull off.

One stunning shot involves a large rusty fish – an old abandoned seaside attraction – five brightly dressed dancing girls emerging from its mouth, Herman sat on a chair watching them like a strict Madame and a spectacular storm coming towards them from across the bay. 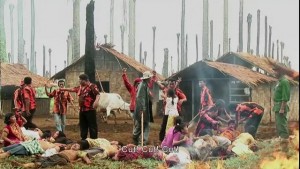 Other scenes include a B-movie style gore-fest where Herman acts out eating Anwar’s dismembered corpse, a shocking re-enactment of a village massacre (the cameras stop rolling and the child actors continue to cry) and a noir style interrogation when Anwar, playing the victim, begins to realise the horror of what he has done.

The initial lack of remorse, or even acknowledgment that what they have done as a bad thing, is the most shocking thing about this film.

The gangsters are hero worshipped by the government – it is explained to us many times that the word gangster comes from the English word for ‘free man’. The rallies of the right-wing Pancasila Youth paramilitaries are attended by the Vice-President amongst others. Because of this families of the victims have learnt to keep quiet and to pretend the massacres didn’t happen. None of these proud murderers and self-confessed torturers have ever had to face up to their actions, as it is officially condoned.
When they are forced to think about the past in detail, whilst making these over-the-top re-enactments, Joshua is there to document their conflicted and twitching frowns.

At one point a production assistant on one of their elaborate shoots cheerfully suggests including a story in their film from his childhood. He was woken up to screaming as his step-dad was dragged off in the middle of the night and murdered. The next morning they found him in a pipe and buried him ‘like a goat’ at the side of the road. The half made-up faces of the gangster/film-stars are a picture of uncertainty. Here is a former enemy, or child of one – someone they would have had no hesitation in killing when he was a child – working with them to glorify their killings and offering up his traumatic experiences as material. An unforgettable moment. 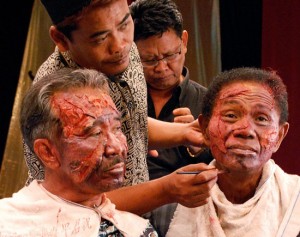 The most affecting part of the film, however, is when Anwar begins to question his deeds. Nightmares plague his sleep. He watches himself back on telly, his reactions documented painstakingly by his friend Joshua, and he begins to frown deeper. Finally, while playing a victim who is being strangled using his favourite wire technique, he is visibly shaken and physically sick, unable to carry on. His almost complete transformation from amoral arrogance to nervous breakdown is fascinating and brutal to watch.

This film is unlike any I have ever seen. The surrealist elements add a bizarre colour to a story that is as dark as they come. As Joshua Oppenheimer explained in the Q+A, we’re used to stories that are simplified into good versus evil. What is terrifying about The Act of Killing is that perpetrators of genocide and torture in Indonesia can talk about their war memories with the same nostalgia as WW2 veterans.

The sheer horror of extreme human cruelty is explained in an unsettlingly matter-of-fact way. The unexpected humour and warmth some of these murderers possess (others are actually fully evil) confused and unsettled me. I left the cinema and walked aimlessly down to the train station and back, collecting my thoughts. A sunny Thursday afternoon had never seemed so nightmarishly normal.

Oppenheimer has been criticised for not showing any interviews with survivors or the victims’ families. He tried to explain this away in the Q+A by arguing their identities had to have been concealed and shadowy or blurred faces would have jarred with the vivid interviews and dramatisations of the rest of the film. This is not a good enough excuse and it is a shame that the only victim we hear from is the scared and sycophantic production assistant, although his effect on the killers is very interesting.

Also, the 159min director’s cut shown here was definitely too long , uncomfortably long for a documentary, and along with the lack of voices from the persecuted it is the only reason I have not given this film five stars. A much more appropriate 115min version is being shown elsewhere.

A truly original masterpiece, it has the potential to change documentary film-making forever. It is already having an effect in Indonesia. Asked what the reaction to the film was in Jakarta, Oppenheimer likened it to the child in The Emperor’s New Clothes who calls the emperor naked. It has pointed out what everyone knew but wouldn’t dare say out loud.