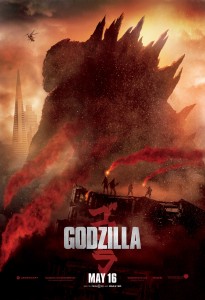 Its hard for me to put into words just how excited I was for Godzilla going in. As a young boy I had several Godzilla movies on VHS, my favourite of which was Godzilla Vs. Mothra, in which the king of monsters is pitted against the king of moths. I can still remember the excitement I felt when I was about 7 or 8 and I heard of Gojira’s latest reboot, and as I was still a child at the time, I thoroughly enjoyed it. I even loved the cartoon that accompanied the film on Cartoon Network, in which Godzilla’s talking, human sized, cousin lived on a boat with a team of people who would help Godzilla with various things. Unfortunately for the world’s most famous Kaiju, enthusiasm for Godzilla seems to have dwindled over the past decade, with the Matthew Broderick effort seemingly leaving a sour taste in a lot of mouths (in reality Godzilla was still alive and kicking in Japan). Until one day, as I was scouring one of my old internet haunts, I came across the news that Legendary Pictures would be making a new Godzilla movie. I was already sold and every bit of news only served to hook me in further. First the news that Gareth Evans would be directing, exciting, then the casting announcements came, each one better than the last. It wasn’t until the first teaser was released though did I truly realise the potential of this film. The visuals were awe inspiring, the sound of Robert Oppenheimer’s haunting words, the founding father of the atomic bomb. I had to see this film.

By the time the film will be released that first teaser will be almost 3 years old. In that time my excitement had been tided over/amped up with a number of incredible trailers, but yesterday the time finally came, I headed down to my local IMAX to do it in style. Normally, the things you build up the most, will always let you down furthest, and over the years Hollywood had made me increasingly skeptical. After all of this, would Godzilla be added to a long list of let downs? Thankfully not.

Director Gareth Evans manages to bring us a film that honours the spirit and feeling of the original, whilst avoiding just a carbon copy. The film’s plot is as much about family as it is about Godzilla, as Bryan Cranston seeks to find the truth about a disaster which tour apart his family, and Aaron Taylor-Johnson does whatever it takes to get home to his wife and son. Both are stories we’ve seen before, but the truth of the human drama in this, pitted against the backdrop of a giant monster brawl, is what sets this film apart from other blockbusters. The level of emotion in this film will seriously surprise you, with Bryan Cranston and Elizabeth Olsen, in particular, performing fantastically, my only complaint being that they were both underused. Everyone performs well, and more importantly they are believable in their roles. Evans said that when making a movie about Godzilla you only get one get, that this universe has giant monsters, everything else has to be steeped in realism. This can be seen throughout the film, including the cast and characters. Aaron Taylor-Johnson does a fantastic job as the young father/soldier, and is a thoroughly entertaining and endearing leading man, who undoubtedly has a great career ahead of him.

The films visuals are also worthy of extremely high praise. With a background in Visual effects, and having done all the effects for his first movie, Monsters, himself, Evans clearly has a keen eye for them. And it certainly shows in the film which is just utterly awe-inspiring from start to finish, Whether its the path of wreckage left in a monsters wake, or a cave filled with a giant skeleton, or the water dripping off Godzillas back, the visual also look incredibly realistic, and artistically gorgeous and sinister. The rain and cloudy skies of san francisco give Godzilla a unique look, as if a storm is always approaching. Godzilla himself looked as near perfect as you could hope for. The final scenes in which Godzilla and Muto clash put Transformers and Pacific Rim to shame.

Godzilla is blockbusting done right. Akin to a superhero origin film, if the 1998 Godzilla is Batman and Robin, then this one is Batman Begins. Evans reveals his king of the monsters perfectly, teasing him out (including several teases in the fantastic opening sequence), before finally revealing him completely, and showing plenty of him, something monster movies can quite often get wrong (Ahem Cloverfield). A wonderful spectacle with a human heart, which manages to keep the essence of the original films, whilst very slightly updating the always relevant message. Here Godzilla just wants to protect his planet, we are nothing but ants to him. As humans we believe we can control nature, where as in reality, our attempts to do so can end up hurting us and the planet, as is the case here when a MUTO (Massive unidentified terrestial organism) is allowed to feed for 15 years. Godzilla is a force of nature, out to restore the balance that humanity disrupted, neither good nor evil, he’s Godzilla.