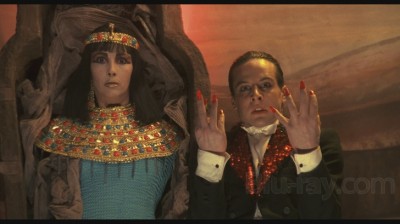 Much of modern horror depicts teenagers running from a gruesome scenario or fixates on the paranormal. Both these genre trait lead to some very entertaining product as well as some interesting variations on a theme such as Joss Whedon’s Cabin in the Woods, but the modern era could be said to lack some of the creative abstract moments of films from two or three decades ago. Not to worry, horror stalwart Alejandro Jodorowsky returns to the big screen next month with one of his most critically acclaimed works, Santa Sangre. Replacing jump scares and ghostly occurrences with bizarre, surreal images, Santa Sangre manages a strange but delicately conceptual motif entwined with the Giallo horror style for which co-writer Claudio Argento’s brother Dario became famous. Not a style that will satisfy all who approach it but certainly a refreshing option, handpicked from Jodorowsky’s accomplished back catalogue.

Experiencing Santa Sangre is to be assaulted by a barrage of strange and dreamlike images that are magnetic in quality. From the outset the mind is entranced by bizarre happenings, the first scene introduces protagonist Fenix (Axel Jodorowsky) as a mad man atop a tree branch in an asylum. He is being coaxed down by nurses and physicians with a standard looking meal and a raw fish. Against the will of the Doctors, Fenix opts for the fish and begins consuming it. This scene leads straight into a flashback showing young Fenix (Adan Jodorowsky) as a circus magician.

Fenix has lived through a terrible ordeal, seeing his mother, trapeze artist and cult leader Concha (Blanca Guerra) have her arms cut 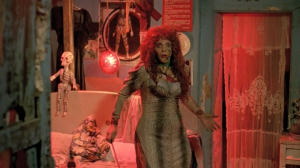 off by his father Orgo (Guy Stockwell).  He then sees his Orgo commit suicide and his childhood sweetheart Alma (Favolia Elenka Tapia) taken away, a distressing environment for a child to say the least. A picture is painted of Fenix’s traumatic adolescence all the while surrounded by circus farce. The death of the circus elephant epitomises the madness at the heart of Jodorowsky’s film. Clowns and circus performers dress in black versions of their usual costumes with grey and white USA flags billowing in the breeze as the clowns fire fake tears from water pistol glasses. A parade with the giant elephant casket follows along the streets before tossing their departed friend into a dump yard.

Jodorowsky manages a more sedate form of horror than might be seen in Argento’s Suspiria but remains faithful to the deranged visuals, exaggerated violence and flowing blood of the Giallo master. The music is both loyal to the style of film and distinctive. Jodorowsky adds Mexican street bands to accentuate the feeling of hopelessness and poverty in which the characters reside.

Fenix and his mother are brought together again and she forces him onto a vengeful rampage acting as her arms. The action is majestic but too otherworldly for its own good, dragging out sequences that could do with being sharper and punchier. Jodorowsky manages a pace as reflective as an Antonioni piece but the subject cannot afford it. The film is peculiar and haunting, highlighting the real pain of Fenix masked in the unreal, violent and darkly humorous. 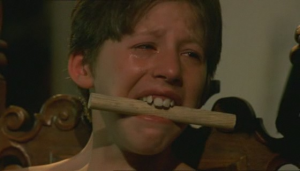 Santa Sangre’s strength and defining feature is the analysis of the pain Fenix experiences during his life. The mental anguish forced on the child at such a young age has caused severe damage and when reunited with his mother, he shows an inability to control himself or to quell the bloodlust of his frenzied matriarch. The style of the film will be appealing to some, fans of Argento or Giallo or horror fans looking for something more substantial but the content gives Jodorowsky’s film a human element amongst the ghostly visuals and monstrous acts of violence. The poetry and horror combine to make Santa Sangre an unforgettable experience.