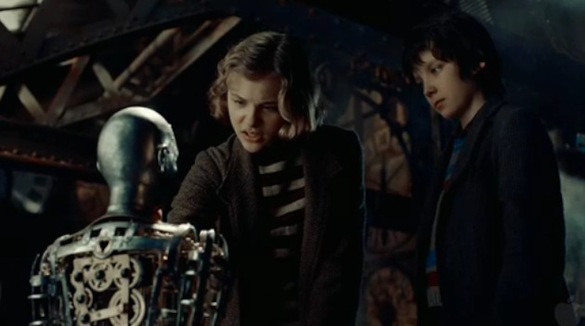 Some of the earliest, and very positive, reviews of Hugo stated that it was too good for kids. Whether it was, as is probable, a joke or not, the suggestion highlights a damaging misconception that films for children should be held to much lower standards. Some would have auteurs only make films that are dark, edgy and to be appreciated by adults, yet why should the best directors in the world not bother with children’s films? Martin Scorsese is hopefully setting a precedent here for previously serious, ‘adult’ directors to tackle the possibly more challenging area of the family film. Who wouldn’t want to see David Fincher direct The Famous Five? Or Cronenberg direct the third Diary of a Wimpy Kid film? Well, maybe not, but Hugo is a brilliant start to breaking down an apparent stigma against more family oriented cinema.

Scorsese beautifully balances the sense of simplicity required to entertain children with an artistry that its audience fully deserves. Based on the gorgeous ‘novel in pictures’ The Invention of Hugo Cabret by Brian Selznick, the story is quite traditional in many ways: a young orphan (the eponymous Hugo as played by Asa Butterfield) befriends another (Chloe Moretz’ Isabelle), and the two of them get up to all sorts of adventures as they try to uncover the mystery of the robotic model his father left with him, and the grumpy old man (Sir Ben Kingsley) who seems to know something about it. All whilst avoiding the comically villainous station guard that enjoys rounding up orphans (Sacha Baron Cohen, bearing a moustache and confusing accent).

From this pleasingly basic premise Scorsese crafts an enchanting tale essentially about how things work, from films to clocks to people. Under the camera of DP Robert Richardson, Paris’ Gare Du Nord is a whirring, turning maze of cogs and wheels, a playground hidden behind the posh exterior. Whilst the main hall of the station, meticulously reconstructed and featuring some of the best production design of the year, is undoubtedly beautiful, the building really comes to life in the steam filled corridors behind it. Scorsese wants us to see behind the veil of the station, to understand what keeps it going, not not in order to strip away the magic, but to increase it. That’s why the insides of the automaton are visible, and why there is one particularly joyous scene in which we see a film being made in a glass house: in understanding what makes something work, we appreciate the thing more.

Which all contributes to what is essentially the great director’s hymn to cinema itself. The call to film preservation may be lost on the youngest audience members, but what Hugo might do is unlock a love of cinema similar to the one found in the man who made it. Clips of footage by the Lumière Brothers, George Méliès and Harold Lloyd are scattered throughout the film, as well as homages to said scenes (it doesn’t get much more obvious than the poster of Hugo hanging off a clock face), meaning that Hugo serves as a not at all stuffy introduction to film history as well as a great piece of entertainment. 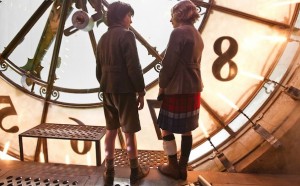 Not everything works, and in fact the film only really takes off in the second half. The first is filled with the kind of awkward physical comedy that you’d expect a teacher to attempt, in order to appear cool to his class. Baron Cohen’s character is an uncomfortable screen presence, hammy yet not to the extent where he’s actually funny, and making his sub-plot with a flower seller feel oddly disjointed. It’s as if Scorsese did not have enough faith in Hugo’s story alone to engage the children, and so added some comedy chase sequences to make it a bit more fun. There’s just one too many, and none of them are particularly good. There’s also an awkward attempt at drawing laughs from the fact that the station master can’t walk properly, which feels a little sour.

And of course, the whole thing is in 3D, although good cinemas should give you a 2D option, which this reviewer has not seen but would probably recommend anyway. Whilst it was filmed in 3D, thus making it significantly better than the lame retrofitting jobs that have plagued Harry Potter films and guff like Alice in Wonderland, it still feels totally extraneous to the film. It’s a pointless gimmick, and although it is some of the best 3D yet, there’s nothing on show that adds to the film or to the argument that the medium is the future of cinema. In fact, it’s actually distracting in some places, removing some of the wonder of the set design and gorgeous colours for the sake of a bit of extra ‘depth’. Scorsese of all people should know that what gives a film depth is the characters and relationships in it, not a snazzy camera that makes someone appear a little further away.

However whilst not every cog in Hugo‘s intricate design is necessary or functioning correctly, the machine as a whole is a beautiful contraption, a paean to the cinema of dreams that may just make you fall in love with films all over again. The 3D isn’t the trick; that does nothing. Instead it’s the heart behind it and the dedication and artistry in the making of it that makes it something special. Forget Alvin and the Chipmunks 3, Hugo is a film your kids deserve to see.