A Trip To The Moon – Blu-Ray Review

Step Right Up and Witness Something Like Never Before. The Magical Marvel Méliés Comes Into Colour. 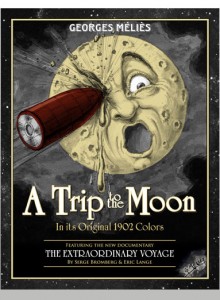 When vintage movies collide head on with up-to-date technology, uproar amongst film fanatics is usually not too far behind. What we have here is a rare exception.

In 1902, pioneer of the fantasy genre George Méliés celebrated the release of A Trip to the Moon. Little did the cinematic wizard know that his short would once again be celebrated in a re-release 110 years later, as Lobster Films’ colour restoration hits the Blu-Ray market.

We’ve all seen the now-iconic symbol of a rocket plunged into the eye of a personified moon, and more often that not, this has been in the way of the many manipulated variations that have been recycled by our contemporary cultural forms. But it’s only a percentage of us that can really locate its source.

The magical marvel Méliés contributed to cinema at the same time as the likes of Lumiére and set foundations for which contemporary cinema would build upon. The French illusionist practiced innovative techniques, ways to distort reality through the camera. the tricks that he discovered are now essential to the way we view cinema today. His revolutions in cinematography have shaped the conventional Hollywood mode of storytelling as the ‘cinemagician’ was one of the very first filmmakers to utilize the multiple exposure, the stop edit, hand-tinted prints and the dissolves. 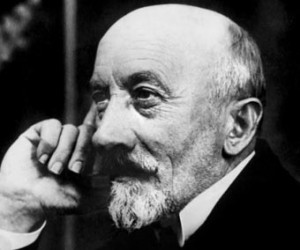 This April comes a cinematic highlight, as a film that changed the course of movie making comes back into view. Where no original copies had been salvaged from the devouring depths of history, the proud year of 1993 produced a revelation as an ultra-rare nitrate print of A Trip To The Moon hurried out of a private archive of a Spanish collector and into the grips of restoration expert and documentary filmmaker, Serge Bromberg.

Regarded as one of the most complex and determined restorations to go ahead, not to mention surgical as the fragments that comprise just shy of 13,500 frames are required to be reshaped, the archaic but monumental thirteen minute short (being the longest film ever made to its own contemporaries) is digitally restored with several new features to look forward to.

Not only does the Blu-ray offer two additional scenes, the frame has been horizontally stretched so more of Méliés’ film can be appreciated as he intended. The disc is packaged as a limited edition steel book, to provide those hardcore buffs with a more than worthy edition to their time-honored collections.

The bonus features include the option to watch the original black-and-white version with the choice of three soundtracks, all of which are fairly in-sync with the original film itself. Unfortunately, the Blu-ray version departs with originality in the form of aural modernisation. The Rock ‘n’ Roll sounds of a French electronica group (Air) provide a contemporary score that rather dampens what could have been all-round success. A trivial mistake on Bromberg’s behalf, Méliés fans must settle for a less than desirable ambience.

Accompanying this release in terms of additional bonus features is a documentary by Bromberg titled The Extraordinary Voyage. The title in itself already pays tribute to the virtuoso as it steals parts of its name from the second half of Méliés’ two-handed success, The Impossible Voyage (1904). The documentary, featuring testimonials from the likes of Jean-Pierre Jeunet and Michel Hazanavicius, pays homage to the success of Méliés and highlights the impact he has had in terms of cinema history and special effects. 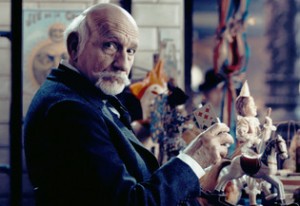 With the past few months already seeing a lot of Méliés’ rebirth in contemporary cinema, Martin Scorsese’s Hugo being the exemplar, Bromberg’s restoration could not have come at a more appropriate time, as it exists in the wake of Hugo’s achievements.