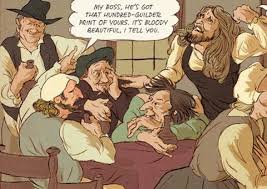 Typex proves that to tell a life in pictures honestly, you must immerse it in all that its protagonist revealed. Rembrandt was born in 1606 and grew to be a great artist. He was at the forefront of a Dutch generation of masters. Married to Saskia and into money, she bore him a son and then died. His despair (and excess spending) lead to financial decline. He took commissions that were never paid for, spent years in the wilderness as he tutored artists and died doing the work he loved. We find Rembrandt as  the man of legend. A person who lived for art, who loved everything about it. From its creation to its completion. He gave up everything in aid of its very life. 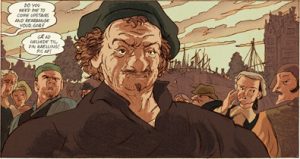 Commissioned by the Rijksmuseum, in honour of a new exhibition, this graphic take on his life deserves attention. However to talk of this work is not to talk about how we frame Rembrandt and his life, filled as it was with drama and peak or trough but more about its creator Typex. 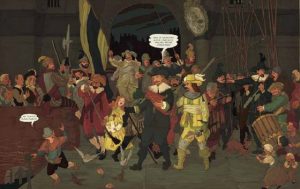 Typex or Raymond Koot to the seasoned, has done something astounding here. A capsule of time has been taken. The contradictions of a world both filled with vice and with virtue (both not always from where they are expected). A salacious and bawdy eye for the time and tone of the world he inhabited. A rich texture of detail that reflect a depth of research and revelation. From the sharp tongue of the man to the debauched manners and brazen sexuality that are fresh and raw in tandem. 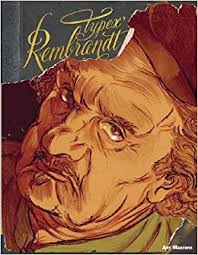 He has translated a mythical figure into a human and crafted the world of the man, as well as the world of counter contrary. With traits of Rembrandt as student, sage and sardonic wit merging to expel the belief in a single version. Typex mixes the artists with the art to ever more stunning effect and layers a character often confused. It has had the effect of making his life fresh with a sense of the visual humour of his great works.