Holmes is back…well he never left us but these four adventures chart his heady rise to heroic status. From A STUDY IN SCARLET and the desert death dealer, to THE SIGN OF FOUR with the cocaine help, VALLEY OF FEAR and on to THE HOUND OF THE BASKERVILLES and the demonic beast of the moors…. 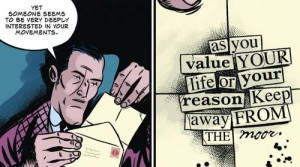 James Bond, Sherlock Holmes and Harry Potter live in infamy. They are so recognisable and so well known that it makes them ripe for parody and over exposure. This feeling had hit me, when these books landed on my mat for review. I love Holmes but had become dulled by the frankly absurd Cumberbatch incarnation. Things haven’t been helped by Jeremy Brett version that was often hamming and thespian but still retained some of the grace of Doyle’s written word. So I embarked with the original story and hoped for the best. 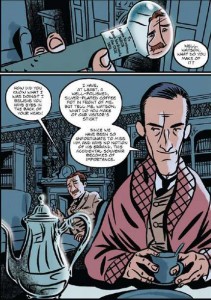 A STUDY IN SCARLET as well as being the first story written for Holmes, is also the most important story to get the gauge of Watson. For it defines what he was, is and will become. The translation gets it about as spot on as it can be. Watson is layered with the war as a part of his physical being and psychological heart. The dialogue is skilled at doing this but it is the visual manifestation that really brings this to life. I was very impressed and as I stormed through the work I felt that this was a superbly tempered translation of a pivotal piece. The work is supported by its writing but holds up because of its visual prowess. I moved on THE SIGN OF FOUR and to my favourite piece. This is a Holmes exploration. It is essential to knowing who Holmes is. The work seemed to begin without an emphasis on this, I felt. However it brought together itself in much more of a skilled fashion then many of its predecessors. It doesn’t over indulge the drug taking, it makes it a portion of his being. It was a way to distract and this is understood here. Skilled wordsmiths take note of this work. Ian Edginton gets it on the mark. 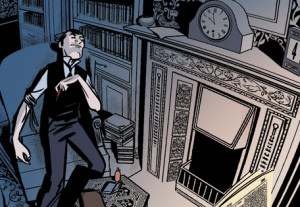 VALLEY OF FEAR is my least favourite work, as it begins the slide to commercial venture. In this case the graphic novel keeps this tempo and I feel is the weakest of the four works because of this but I also bring and eye of disdain so make of that what you will. THE HOUND OF THE BASKERVILLES has little new to bring to it. A story that like say the Bible is very well known. It however is a solid visual interpretation that for anyone unaware of the story or who has avoided the Sherlock series must read as it is a faithful and energetic retelling with style and weight.

Order from Selfmadehero. I would suggest that you take three of these great works. Bar THE VALLEY OF FEAR, all are very well worth exploring….