Murder, mystery and the 4 minute mile all combined in this detective piece. When Todd “The Phoenix Flyer” Naylor is found dead in the desert, P.I. Daniel Stone is called in. The police seem to have washed the case up but Stone finds that Naylor’s death is more complicated. Gambling syndicates, criminals, crooked cops all surface as Stone reaches the truth. 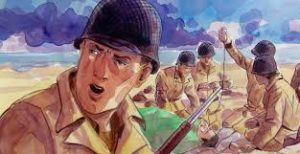 A detective story often stands or falls on its detail. By this I mean Hammett had the detail of language. Doyle the detail of examination and Christie the detail of motivation. The plot obviously is paramount to a detective quest but in truth this can be superficial. I dont mean it should be throw away more it could be simple enough that if the exposition is compelling or captivating, you only need broad sweeps not the minutiae. 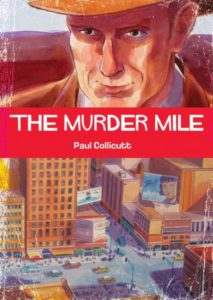 Within The Murder Mile you have just that. A film that is a paint by numbers story of corruption and murder but within which you have a lead character acclimatising to a post war world. Taking this world not on face value but as cynical and caustic as any PI of literature would. However he also injects some hope and restorative optimism. His journey and ours is also given value by the submersion in an event that pushed athletics forward. Writer Collicutt gives us a fairly potent world, with occasions of darkness and others of light. He illustrates the piece with a cool eye for human detail but also has playful strikes. Its not the noir realm nor is it the cool as detective story that you may want. It is however a skillfully told, well executed and enjoyable read that will make for return visits.