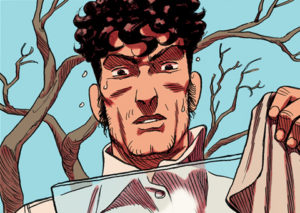 The tale of the American West on the verge of white settlement, is a surprising and potent narrative exploration of identity, sexuality and history. Oscar Forrest is on a journey to photograph the American West, it’s people and its terraforma.  He has a boss who is over seeing the project, Stingley. A man who is not only a worldly Geologist that sees the charting of Geology interest in the region as only a slither of his duty. He also cares about the untapped resources riddled across the land. Alongside them is Milton, a young quiet boy servant and mystery. This mystery manifest in an unnatural ability that both intrigues Oscar and opens doors to human desire. 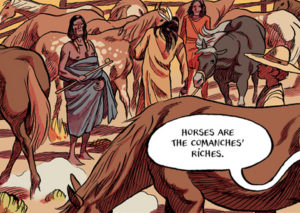 Writers Fredrick Peeters and Loo Hui Phang are not new to the world of graphic novels. Peeters wrote Aama. Aama was a delight. Visually stunning, actually sumptuous would be more accurate. It made Sci fi come to a new era of exploration and expectation. Resolving to explore new world’s, exploding with bold colour and personality. Phang is new to me but has worked on projects with Cedric Manche and Hughes Micol. The Smell of Starving Boys sees them working together for the first time. Taking its cues from revisionist westerns, colonial studies and sociopolitical discourse, we traverse the landscape of middle America just after the Civil War.

Taking in this virgin landscape with the aid of three people, all with pasts less than pure. We are asked to meditate on what it means to be placed here and what it makes of us.  What it meant for those who lived and co-existed with the land and those who now set about owning it. You see now the war is over, the peace must bring about a new order. 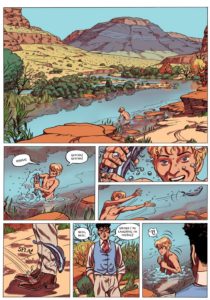 Money will define the American century to follow and the exploitation of its natural spaces will happen at a pace. What is most profound here is its meditation on the image and the person. One sees the image as capturing a moment and that is half of what this journey is doing. However it is also an act of classification. Delineating the people and places into objects of value and worth. Stingley is the arch capitalist and villain of this process. He wants it all evaluated before it is eviscerated. He commands a fair level of venom from all but is well written. Flexing tone, texture of opinion with his girth of hubris.
People classification is part and parcel of studies and it makes for much here. The novels characters and it approach to them helps to reinforce this narrative of placement into groups. Within its confines however its most interesting  character is Oscar. No American native he in turn upends his beliefs in himself and constructs a more developed personality through the journey.

He is the American of generation past, present and future. He also happens to be gay and in love with the young aide Milton. This leads to a destination that might assuage some and irate others. My only view was that it’s a balancing act. Commentary if you like on the schizophrenia of the land of Americans.
The artwork again opens up new world’s. Hither to seen often and regular but also feeling like a newly seen dawn. It’s sculpture is warm and worn. It’s plant life hopeful and hostile but dashed with empty vastness. I loved it enough to want to ponder over its frames and I suspect so shall you.
ISBN: 9781910593400
Available: November 2017
Binding: HB
RRP: £24.99/$29.99/$35.99
Size: 240×320
Extent: 112
Colour: Full Colour