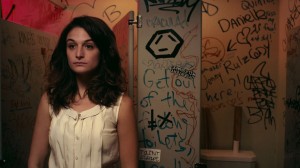 First time writer and director Gillian Robespiere’s film, Obvious Child, is the sort of wonderful movie you always want to find. Starring Jenny Slate, as Donna, a twenty-something’s comediennes, who’s on stage shtick is talking about her life freely and crudely, riffing on everything from talking with her arse to her Jewish boyfriend, the latter of which leaves her single. After a night of whirlwind romance in the loosest sense of the word, with Max (Jake Lacy of The US Office), she is forced to confront the reality of independent womanhood, as she plans for a not-so romantic Valentine’s Day abortion.

Obvious Child is incredibly funny, whilst managing to achieve a poignancy within its profanity. It is an absolute joy to find a film like this, so carefully and beautifully scripted by Gillian Robespiere and an outstanding performance by the loveable Jenny Slate. All the supporting performances are really strong as well, Jake Lacy is very affable and understated. Gaby Hoffman doesn’t quite steal the scenes like she does in Girls as Donna’s best friend, Nellie, but she’s good regardless, and the always excellent Richard Kind is fantastic as Donna’s puppeteer father.

Obvious Child will no doubt draw comparisons to Girls, Frances Ha and the like, and it is easy to see why, but it has it’s own energy that gives it a unique 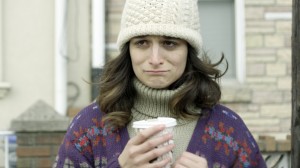 feel. It’s vulgarity for one, Jenny Slate reminds of a young, tuned down Sarah Silverman. As of yet every time I have seen her in something she has stolen the show, be it as Jean-Ralphio’s sister Mona Lisa in Parks and Rec or Amelia on Hello Ladies, she kills it, and I am happy to see her in such a refreshing and wonderful role.

Obvious Child is a brave and rare kind of film, with a unique voice and a strong cast all delivering great performances. Coupled with a hilariously vulgar, but poignant script, and carefully crafted. It is a film I will no doubt visit time and again.