It's Such a Beautiful Day Review
Home
Reviews

It’s Such a Beautiful Day Review 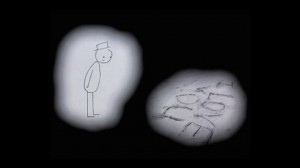 A mainstay of the fledgling but perseverant independent animation scene, Don Hertzfeldt – probably best known for his absurdist short Rejected, inexplicably, but deservedly nominated for an Oscar in 2000 – makes his animated films entirely by hand; writing, voicing drawing and animating his works himself using antiquated 35mm film cameras. “Computers just take all the fun out of it.” His latest, It’s Such a Beautiful Day, three twenty minute shorts made over an eight year period compiled seamlessly into one exhausting, emotive feature, marks both a culmination and evolution of his signature style.

After receiving attention and awards for the first few shorts he made during his time at University, Hertzfeldt unsurprisingly found himself with proposals to apply his talent to the world of advertising. His response, the aforementioned Rejected cartoons, mark the start of a career that favours integrity and creative freedom at the expense of relative obscurity. For the animator, this wasn’t an act of particular defiance, instead the only path imaginable.

Rejected was a collection of absurd and hilarious vignettes presented as responses to a proposed contract of adverts for The Family
Learning Channel. Whilst remembered now largely for the line ‘my anus is bleeding’, Rejected also shows the formations of an animator with a penchant for formal inventiveness, the increasing discordant adverts giving way to complete breakdown of both the mind and page, flipbook pages tearing and folding, leading to the total inversion of the whole animated universe. Its the kind of fourth-wall breaking chaos Duck Amuck creator Chuck Jones would favour, and indicative of the grander approach to shortform animation Hertzfeldt would lead on to.

From this, Hertzfeldt made The Meaning of Life, an equally chaotic film, but thematically a much more ambitious one. In The Meaning

of Life Hertzfeldt stages a sweeping visualisation of the incomprehensibility of the entire universe, starting with a Hertzfeldt variation on Darwinism and ending with the wonders of the animated cosmos, all in twelve, beautifully animated minutes. This is the kind of scale and complexity that he would continue in the next three shorts that became his first feature, and in it a seedling version of the richness of It’s Such a Beautiful Day can be observed.

It’s Such a Beautiful Day then, not only brings his three latest shorts together, but indeed brings all of this work together, welding the absurdist humour of his early shorts, with the propensity for profundity and abstraction he displayed in The Meaning of Life, producing a resultant work that reveals an maturity, depth and universality, as well as a real emotional intelligence that may, or may not be immediately associated with the creator of those Rejected cartoons on youtube. To go from rectally-fissuring popcorn kernels and giant banana men to cosmological expositions shows an almost impossible evolution.

Operating from within the mind of protagonist Bill, a generic looking stickman identifiable by his crudely drawn hat, Hertzfeldt, through his own breathy, poetic narration, takes the viewer through Bill’s thoughts, both low and high, as his brain falls plague to decomposure. From the concerns about not taking the crotch-level fruit in supermarket stalls, to the immense beauty of the threads in his bathroom floormat, Bill’s musings are somehow equally trivial and incredibly affecting, Hertzfeldt achieving a remarkable universality in his observations both microscopic and cosmologic.

Through the experiences of his little hatted man, Hertzfeldt explores themes as grand as the ephemera of memory, the fragility of the body, and the immense wonder of merely being alive. Expounding Bill’s thoughts and memories through a stream of consciousness approach, Hertzfeldt layers fragments of experience, past and present, showed through snippets of jerking, flashing segments of repeated animation mixed in with live footage and expressionist colourful imagery and bursts of sound. Detached from any emotional resonance, its a technical marvel, a mixed-media canvas of the varying animation techniques available to the analogue animator. 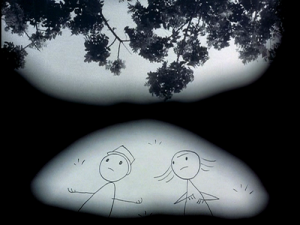 Whilst avante-garde in terms of construction and linearity, Hertzfeldt’s film remains inclusive, drawing in his viewers by demonstrating the universality of Bill’s experience through the shared ironies and puzzles of life. It all moves at a blistering pace, and is quite draining as a result, Bill talking almost constantly, about the fish-headed man at the bus stop or the fleeting interest of toast, the visuals darting around with his mind, in and out of space and time, but parts of it will resonate with everyone, Bill’s experiences being fundamentally human experiences and thus something we all share

Hertzfeldt’s film may seem depressing, making the viewer partisan to the gradual decline of a person’s brain by placing them inside of it, but really it’s message is overwhelmingly positive and its mood decidedly empathetic. Death is inevitable, the awareness of it’s increasing proximity gives Bill a fresh look upon his life, and a new appreciation of every aspect of existence. It’s a film about perception, how everyone experiences and observes life differently, and how those who appreciate the delights of even the most simple moments of it are the happiest.

It is hard to state just how stirring an experience It’s Such a Beautiful Day is, other than to say that its reach mirrors the greatest, most ambitious of live action films, and its specificity and universality that of the most emotionally acute. As richly felt as it is realised, Hertzfeldt’s feature mixes high and low level lyricism to paint a picture of existence as destructive as it is rapturous. This unwavering enamourment comes with a degree of bias, I hold a great affection for both Hertzfeldt’s work, and serious animation of any kind, but even with that in mind, It’s Such a Beautiful Day stands as a pinnacle of these things, and should have value to those who hold no sentiment towards either. Importantly, even assuming you can’t make it to the ICA,  it costs $2 (£1.29) to rent on vimeo. There is no reason not to find out. “The world is clumsy and beautiful and new.”

It’s Such a Beautiful Day plays at the ICA for two weeks from the 3rd May, and can be rented or purchased on vimeo.