The King of Pigs Review 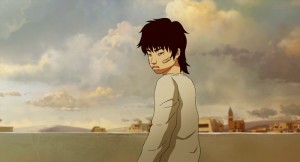 Class dictates power in Sang-ho Yeun’s searing animated inditement of Korean power structures. Dark, bordering on nihilistic, The King of Pigs looks at the perpetuation of oppressive hierarchies through three high school students beaten down by the wealth, as much as power, of their peers.

Nobody fairs particularly favourably in Yeun’s markedly dreary film. The two cowardly protagonists, Kyung-Ming and Jong-Suk, rely on the relative safety brought to them through their association with Chul, an angrier, even more downtrodden boy, who is notable for his refusal to let the elite intimidate him. Chul fights back against his oppressors, getting his share of suspensions and bruisings as a result, growing increasing world weary and maniacal, and becoming something of an icon figure for the other lowly boys. In this, The King of Pigs has its central message, expressing how persecuted groups depend on violent hero figures for vengeance. Individuals that don’t necessarily help the legitimacy of their cause, nor achieve anything resembling lasting progress, but act more as images than anything else.

In Yuen’s parabolic film, Chul rises as the king of the Pigs, the underclass, who are reigned over by the self-titled Dogs, the ruling class. Yuen runs with the notion that this distinction, of pig and dog types, is not only all-encompassing within the school, but runs just as strongly through wider society. Usually the subjects of bullying are comforted by the understanding that their suffering only lasts the duration of their school life. In the film, the oppression of the three central characters during high school stays with them throughout their lives, preventing them from overcoming their inherent position. Its not particularly deep, and it seemed some of the nuances of the man-as-animal metaphors were lost in translation, but it works well enough to hold Yuen’s well structured story together

The pursuit of this message runs eventually into melodrama, and a screaming, over the top rooftop climax that will seem familiar, and offputting, to anyone who has had any exposure to Japanese animation. Indeed, a fair bit of the film may seem familiar, schoolyard bullying is a well covered topic in film. From lighter American approaches like Mean Girls or Heathers, to films that take a little heavier angles, like Todd Solondz’ Welcome to the Dollhouse, Gus Van Sant’s controversial Columbine piece Elephant, or the more recent Lee Hirsch doc Bully, filmmakers seem to have a fixation with bullying. Make of that what you will. 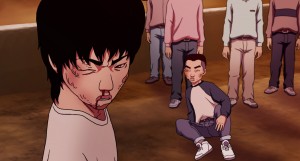 The difference in The King of Pigs is that it uses its miserable high school situation as a microcosm for wider society, bookending the middle high school power struggle story with scenes that show the wrongdoing Kyung-Ming and Jong-Suk experienced at school pervading their whole lives, informing their failures and attitudes and affecting their adult character as much as their adolescent ones. Its a crushing, pessimistic outlook, one thats morosity can’t be fully conveyed without spoiling it with specificities of plot

A closer comparison would be Toshiaki Toyoda’s Blue Spring,  a Japanese film about a rough high school where power groups have overwhelming, vicious influence. Like The King of Pigs, it includes a scene where a kid is doused in urine over the top of a cubicle, as well as another involving a school rooftop. The similarity is close enough to suggest it was an inspiration for Sang ho-Yuen, though the school of The King of Pigs seems more respectable, making the pain occurring within it more shocking. In Blue Spring, the teachers were unable to deal with the lawlessness of their students, in The King of Pigs, they are unaware. 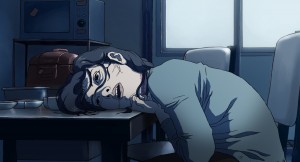 The production values might be a little low; the animation sometimes hokey, particularly in the hallucinatory Satoshi-Kon-lite sequences, and the voice acting often hammy, but considering it was made for only $150,000, it mostly fares well. What really lets the film down is its hyperbolic climatic turn, pushing the grit towards grotesquerie, as the message Yeun started with was pretty damning. if not overly subtle.