The London International Animation Festival once again celebrates an often overlooked and underappreciated art form.
A huge selection of work is shown every year including a focus on a specific animation technique, retrospectives and the best of the current crop of animation from around the world. 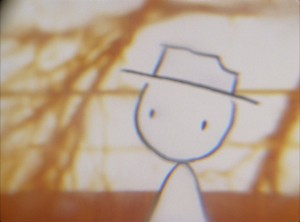 All of them were technically impressive, each using distinct approaches from stop-frame to pin-screen, CGI to live-action/animation hybrid. Oh Willy created a beguiling world out of textiles and featured the most appealing fat naked ginger man you’re ever likely to see. Unfortunately it failed to exploit the potential humour that seemed inherent in the material. It’s Such a Beautiful Day (directed by Don Hertzfeldt) was the clear stand out. A beautiful, brilliant, warped tale about a man gaining clarity as his mind disintegrates. It features Hertzfeldt’s familiar dry voiceover and was full of ambition and heart. Many will have seen his funny stick figure shorts but here Hertzfeldt expands his world with close-up photography and optical tricks. This created a hallucinogenic vision, propelling us into the protagonist Bill’s mind with a furious energy.
The other shorts showed remarkable skills in animation and design but often felt more effective as showreel material rather than satisfying short films in themselves.

LIAFs next screening was the Klasky Csupo Retrospective. Best known for their work animating the early Simpsons shorts and creating Rug Rats and Duckman, Klasky Csupo have played an important role in bringing an outsider viewpoint into mainstream animation. 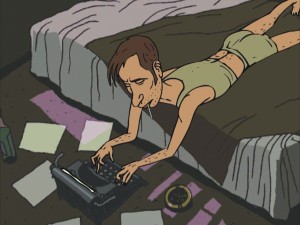 Here we were given a rare peek behind the curtain to see the corpses of never commissioned pilots made over the last 15 years.
The over-riding feeling was just how tough it is to create an animated pilot that both works as a standalone piece and has the required legs to expand into a series.

Outside of the decidedly safe Chuck Sweet (a vanity project for producer Tom Arnold) credit must be given to Klasky Csupo for the boldness on display. You’ve got to admire the sheer chutzpah of the approach with liberal doses of sex and violence applied to characters both human and animal. Generally the work fails to gel yet with the Bukowski based shorts The Way The Dead Love there seems to be the right match of grubby material coupled with a more restrained visual style that makes the surreal touches all the more effective. This could’ve built into a distinctive late-night animation but it’s no surprise that the American networks baulked at the opportunity. Stinky Pierre (created by Everett Peck) held together best with superior direction and fun energy but as with much of this work was probably thought too adult for kids and too childish for adults.

Animated series have become a welcome home for smuggling satire (King of the Hill), filth (South Park), and surrealism (Spongebob) into impressionable minds and we can only hope that the warped energy of Klasky Csupo will make its way back onto TV.
In the meantime we can take comfort in the bountiful annual offerings of the LIAF.