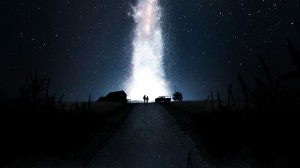 Interstellar needs very little introduction. Christopher Nolan’s latest arrived this weekend with plenty of fanfare, and rightly so. Directed by Christopher Nolan with an incredible all star cast including; Matthew McConaughey, Anne Hathaway, Michael Caine, Jessica Chastain and Casey Affleck, and written by Christopher and Jonathan Nolan. As blight arrives and threatens the world’s future, Coop (McConaughey) must decide whether to stay and raise his daughter and his son, or to travel in to space and help save humanity.

Interstellar clocks in at almost three hours, which in today’s world, a world where most of us don’t go 30 minutes without checking our phone, can feel a little overwhelming, and you almost always feel lulls when in the cinema. To interstellar’s, and Christopher Nolan’s absolute credit this film flies by. I was on the edge of my seat throughout, and whilst I had initially worried that the first act might feel slow, especially in comparison with the second and third, this was absolutely not the case and compromised of some incredible memorable and exciting scenes. Nolan’s pacing is always spot on, drawing you in to his films and hooking you there. Interstellar is no different.

The film is a spectacle, it is absolutely gorgeous. From earth to its black holes, Interstellar is beautiful and will leave you mouth gawped time and time again. I was so pleased to hear that it wouldn’t be released in 3D anywhere as well, whilst I am not anti-3D, this film proves it is not necessaey, to create something so visually spectacular, and visceral and real. Interstellar does a really good job of world-building in its first act, giving a true sense of what it is like to live in this dustbowl.

Interstellar is probably Christopher Nolan’s most emotional film to date, and there was some question as to how he would handle this as some of his previous films have been let down by his heavy-handed approach to emotive scenes (Dark knight rises I’m looking at you). But on the most part Nolan handles it incredibly well, and his cast do as well. McConaughey is wonderful as Coop, and Jessica Chastain does really well with what little she has of Murph. Mackenzie Foy, who played Coop’s daughter age 10 really stole the show for me, with a powerful and very moving performance. At times, Interstellar will have you on the brink of tears, but it can just as quickly have you rolling your eyes. My main complaint with the film was that at times it crossed in to overly sentimental territory, and it’s overall summation of the driving force for the film’s whole plot at the end, whilst it makes sense and I did really enjoy the logic of it, felt a little bit disney for my liking. For a film that is as scientifically accurate, and explores interesting and challenging scientific theory as much as possible, and essentially advertises scientific method in some of its opening dialogue, that is all about scientists doing science, to turn around a say Love is the answer definitely got an eye roll from me and maybe even a physical groan.

Interstellar is a film everyone should see, and that I will see countless times in my life. It is definitely Christopher Nolan’s 2001: A Space Odyssey, 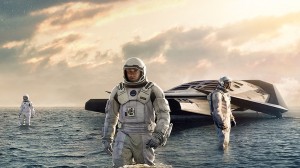 a parellel I am sure Nolan would love to hear. Nolan’s third act harkens back to Kubrick’s, albeit considerably less (to use a technical term) mind-fucky. Whilst a lot of people will call Interstellar needlessly confusing, or bewildering and thought-provoking, in reality it is not. It presents possible and plausible scientific theories that no one else would dare attempt on screen and handles them really well, it walks you through its science through a lot of exposition (The exposition doesn’t feel needless in Interstellar though, its nice to know whats going on) and it’s final acts relates wonderful back to the first, and I left me with very few questions regarding the film’s narrative, but it left me with a hell of a lot of questions about our narrative and our place in this universe, and I’m sure it will you to.