Mohammed El-Gharani was 14 years old when he was arrested in Pakistan and sent to Guantanamo Bay. He was from Saudi Arabia, by way of his familes tribe that came from Chad. El-Gharani was only able to get work on traffic lights, selling water and holy items to pilgrims and travellers.    Seeing options limited in the country for black people, he wanted to better his life by learning computing and hardware building. The only place open to him was in Pakistan. So he travelled there and stayed with a friend of his family. After 9/11 happened, he is arrested and tortured. Under no suspicion except for a value of £5000 being offered by the Americans. He was the youngest person in the prison, treated abominably. Tortured and degraded. Sent to Camp X ray, further brutalised and attacked. Made friends with fellow inmates in equally awful conditions. He was told to agree with what they said and he refused. He rebelled and this annoyed the guards (some where good others less so). Finally released after 8 years of incarceration…but never allowed to return home. 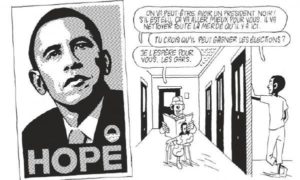 Guantanamo Kid is an uncomfortable read.  Amnesty International endorses this book, pointing toward the failure to close Guantanamo and stop the reditions, tortures and vile abuses of power documented by El-Gharani, as its stance. I agree with all of this. At a time when Shamima Begum is dominating the news, we are asked to focus on a child that was innocent and drawn into a conflict because of place, religion and global politics. Begum’s case is however different to Mohammed El-Gharani. He was not a willing agent in a Jihadist movement. He simply was in the wrong place and sold to the highest bidder. Then incarcerated for 9 years, without due process. Abused and tortured, all documented without pulling punches by Alexandre Franc (who is an amazing artist.) This also said, there is a problem. The central balances of themes falls in its mismanaged exposition. I have to challenge some of the contents here. 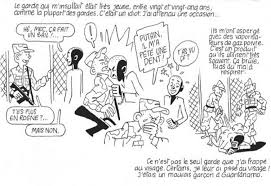 Like that Shamima Begum, this story must be reflected upon.  You see Mohammed El-Gharani story delves into how epi torture and actions, dehumanise people. El-Gharani story then often slips into his idea of being a good person through being a good Muslim (the guard that converts to Islam), that is not neccesary. The story of ‘Uncle Tom’ and American knowledge of race politics (which have then been failed to be reflected in Saudi Arbia), this is haphazardly expressed. Then you have the final act that shoudl have been developed more. I would have been compelled by his Chadian life post Git-Mo. Now the best part of the book is the notes at the end that have the story in a well narrated and deeply upsetting, blow by blow detailing of the events.